Rising costs involved with closing High St for the traditional march to the Cenotaph during Dannevirke’s Civic Anzac ceremony which necessitated a change, may have worked out for the better as the new route starting at the children’s playground and winding around the rotunda and through the beautiful autumn-coloured trees of the upper Domain proved a really lovely sight. The day was fine and hundreds of locals attended the 9am ceremony, which featured a great many groups — schools, families and youth groups like St John Cadets and Girl Guides. Mayor Tracey Collis read a poem about the Anzac poppy, before extending Tararua’s gratitude to those who had served in years past, saying Tararua punched well above its weight when going to war. She also extended her gratitude to First Battalion RNZIR with which Tararua has a special relationship, thanking them for their involvement in quarantine work to keep us all safe, the reason why the full battalion could not attend. Following the normal Order of Service — the Welcome, the Prayer, the Hymn and the Lament, guest speaker Major (Rtd) Ross Himona spoke about the service being like a normal military funeral — the bugle of the lament mourning loss — in this case, all those who have served and passed. He said soldiers just ask for respect and not really to be lauded for their sacrifice, and he asked for people to remember the wives and mothers left behind to cope at home, worrying and struggling, then caring for their often-damaged loved ones if they did return. A very large procession of wreath-bearers then presented to the Cenotaph, graduates from the recent Cactus programme placing the wreaths and later lowering and raising the flag as Pirin Kendall played The Last Post and Reveille. 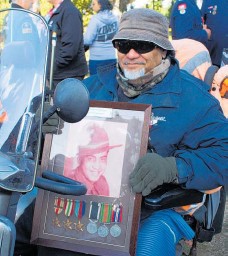 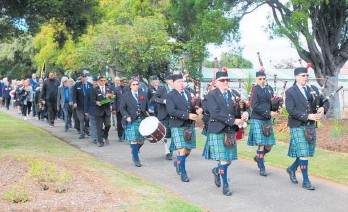