Goldpine manager Gerard McKay had to twist farmer Sean Stafford’s arm pretty hard to get him to invest in at least $500 of Go Fence product to go into a prize draw but it paid off when Sean won a package worth more than $4000 at the end of June. Unfortunately, he had to wait to collect his prize as the North Island winner because of lockdown but last Tuesday it finally happened. Included in the prize were Go Fence posts, insulators, staples, a gate, screws, a fence strainer pack and a Stockade cordless fence stapler, among other items. Gerard said the aim was to promote Go Fence — the company’s own brand of products — and it worked well throughout New Zealand another similar prize going to a South Island winner. Dairy farmer Sean has been milking at Sandstone Farm on Bluff Rd for three years and said he has found Gerard and his team great to work with, having helped him build a shed and more recently stockyards. How far did Gerard go to make that first sale? He even gave Sean’s kids sweets while he negotiated. 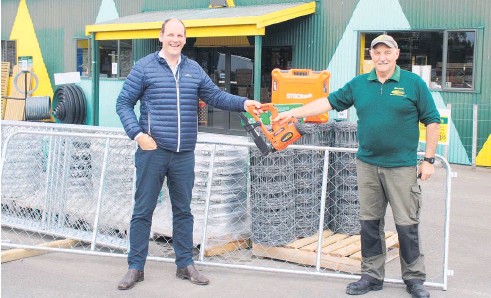