Owners of Gebo look back fondly over years

Graeme Eustace will miss getting up at six every morning to go to work at his shop, Gebo Secondhand Dealers. “I’ll probably get up at 10 past six,” he jokes. Graeme and wife Shonee, who are both in their 70s, are retiring, and have sold the shop they have owned for 18 years in Dannevirke’s High St. “We’ve enjoyed it, but we’ve come to the stage where we need to let young people do their thing.” The shop itself has a bit of a history. It was once McKenzie’s before it was bought by LD Nathan, which turned its merchandise stores into Deka. Deka ceased operations in 2001. Graeme was brought up in the Taranaki. His father had a dairy farm, so getting up early was nothing new. The couple lived in Australia for a few years before returning to New Zealand 33 years ago. They moved to Dannevirke and bought the Gebo building 18 years ago, on September 28. It was very different then, says Graeme. “When we came in it was half new stuff and half second-hand. We got rid of all the new stuff and just wanted second-hand.” Graeme reckons he’s sold almost everything but the kitchen sink — apart from vehicles, that is. Most of that includes items that probably wouldn’t even make it to Trade Me, such as pot lids, potato mashers and egg beaters. Or even buttons — at last count the shop had around 370,000, most of them in the back storeroom. “I know because I went through every one and counted them,” Graeme says. Some rather unusual items have turned up for sale at Gebo’s over the years. Graeme says someone once brought in an intricately carved eagle, which was on display in the front window. They also had a Viking mural, which hung on the wall at the back of the shop. That has been bought by Suresh Patel, who is donating it to the Fantasy Cave for their new premises. Then there’s the mechanical ride that once sat outside the store — it was bought by a local and donated to the Dannevirke Gallery of History. The couple have enjoyed their time in the shop and have met a variety of people, including a few celebrities. Shonee says one of the Topp Twins came through the store once, although she isn’t sure which one. Sir John Key happened to be spotted outside the shop on one occasion, but didn’t come in. Graeme says he will miss the people he’s met over the years. “We’ve made some good friends.” As for what he plans to do with his retirement, Graeme says he would like to get into genealogy. He found out some years ago that his mother, who he had assumed was born in Kapiti, was actually born near Dannevirke, which he discovered when he went to the courthouse for papers to send away for births, deaths and marriages. He found out where the school was and discovered an attendance book, with the names of all his aunts and uncles. “That was exciting for me,” he says. 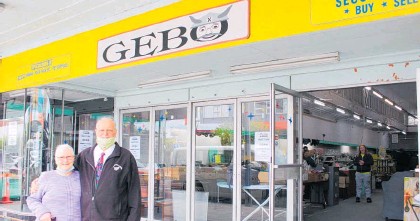