An extremely rare visitor to Dannevirke’s Lower Domain arrived last week in the form of a Nankeen night heron. Its discovery by photographer Steven Bowie was no accident, as Bowie frequently visits the Domain looking for unusual birdlife. Last week he hit the jackpot. “I first noticed it sunning itself on a log on Saturday while walking around the domain with family. “Thinking it was an Australasian bittern, I posted photos on the NZ Bird Photography Facebook page. “Everyone went crazy about it, stating it’s a reminder. “They are native, though not endemic. “There are thought to be about 50 up the Whanganui River but no other established breeding groups. They are a nocturnal heron, so usually feed at night. “This would be a 1 year old, labelled a vagrant (probably driven out of the nest by its parents), and will change colours over the next year. I’ll be looking around for adults over the next few weeks. “Owing to being nocturnal, there is very little known about these birds. “I’ve been contacted by Birds NZ magazine and a number of ornithological groups. There’s a lot of interest in this visitor.” Nankeen night herons are resident only along the Whanganui River from around Pipiriki to Whanganui, where it was first noted in the early 1990s and subsequently found breeding. Birds have been recorded from various sites there almost every year since. NZ Birds Online says elsewhere in New Zealand it is rare, recorded on 24 occasions between 1845 and 2013, ranging from the Snares Islands in the south to the Waikato River near Maungatautari and Pakowai, Hawke’s Bay, in the north and east. It may have bred at Blenheim in 1958. Three banded birds released from Wellington Zoo in 1982 were subsequently seen separately at Pakawau, Golden Bay (August 1983), Waiwhetu Stream, Lower Hutt (January 1984), and Warkworth (1984). There is no evidence that these birds or others released near Wellington in 1852 became established or bred. Perhaps it can add Dannevirke to its list? 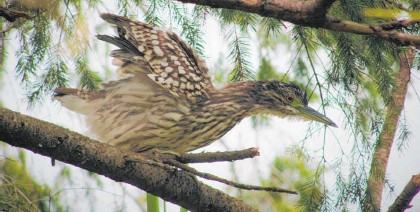 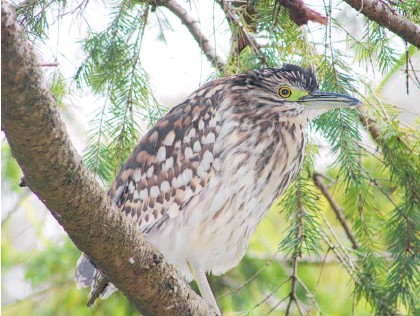