Luke started playing squash at the age of 6. When he was 13, he started training in New Zealand Development Squash. Competed at World Junior Champs 2014 & 15. Highest Under-19 world ranking of 9. 2014 New Zealand Junior Open Champion. 2015 Under-19 New Zealand Champion. 2016 New Zealand A-graded Champion of Champions winner. 2015 Youth Commonwealth Games medallist. Highest senior world ranking of 142. 2017-18 High performance coach for Northland. 2018 New Zealand Squash coach of the year. Luke spent six years travelling the world to play squash. At the end of 2018 he took a few years off from the game and just recently started getting involved again, mostly on the coaching side. Pahiatua has always been his home club and always created the atmosphere where he wanted to keep playing squash. He grew up around a lot of his family playing squash which laid the pathway to his success. 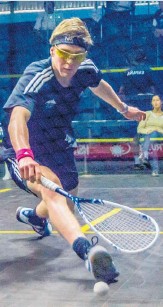