Better to err on side of caution

Imagine a long and strong earthquake striking Hawke’s Bay and a tsunami to rival Japan’s in 2011 is surging its way towards Ahuriri. But thousands of jolted awake residents in the region’s tsunami zones decide it’s a good idea to check Facebook to find out what to do. This is the worst case scenario in an already worst-case scenario, Hawke’s Bay Civil Defence Emergency Management Group says. Do not check social media for advice. Do not check the internet. Do not wait for sirens. Just get uphill or inland immediately. That’s the main message behind a new campaign to ensure everyone living or working in the 20,000 Hawke’s Bay properties in the tsunami evacuation zones knows what to do. A GNS-led research paper published last week concluded that there was a 26 per cent chance of a major, potentially tsunami-causing earthquake occurring near the North Island’s east coast in the next 50 years, he said. The Hawke’s Bay Emergency Management Group controller, Ian Macdonald, said the Hikurangi Fault was a “very similar plate boundary” to the one that ruptured off the coast of Japan, and a tsunami as devastating as the one that hit the country in 2011 “could very easily happen here”. Macdonald said, “It’s a matter of when, not if, a tsunami will impact Hawke’s Bay.” But he said that while the Civil Defence mantra “long or strong — get gone” is well-known, it was less clear that residents knew exactly which properties needed to evacuate, he said. So as part of the campaign all residences, businesses and homes in Hawke’s Bay’s tsunami zones will be sent a letter and outdoor graded sticker with their zone on it. They should then stick it on their letterbox. Macdonald said everyone in all evacuation zones — red, orange and yellow — needs to evacuate if a long or strong earthquake is felt. The zones are used when a tsunami comes from far away so there is time for warnings and planned evacuations but if a tsunami is generated just off the coast, people will feel an earthquake. “When that happens, don’t wait for official warning or advice. We don’t have time to warn the occupants of more than 20,000 properties. We need people to have a plan and get gone. “Even if the power and internet is still working after the earthquake, putting information up online takes time; people should use that time to evacuate. “The earthquake may be the only warning you get. There won’t be sirens; there won’t be a knock at your door. Macdonald said Napier has old public alerting sirens which some people think will be used, but in fact they are never used to warn for a local-source tsunami in Hawke’s Bay. “There won’t be time for an official warning, and the siren system would likely be damaged or without power after the shaking, which is what happened in Japan, even with their modern fixed sirens. “As soon as the earthquake stops, get everyone in your home together, grab your emergency grab bags and your pets if they are with you and get out of there.” Hawke’s Bay residents who felt the large 2.30am earthquake in March and self-evacuated “should be congratulated”, he said. “They didn’t wait for some other signal to evacuate and that was the right thing to do. “It’s better to err on the side of caution.” 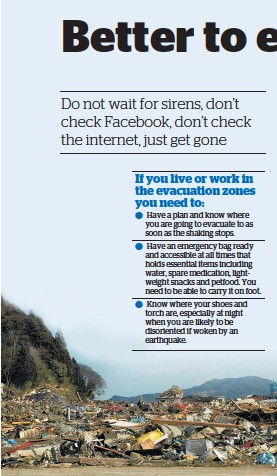