Support the Pink Ribbon cause

Celeste Jones decided to have a mastectomy to prevent the spread of her breast cancer hours before a doctor told the Hastings grandmother her husband’s bowel cancer was incurable. Fifteen months earlier the couple had nursed their 34-year-old daughter Domanique as she died with brain cancer. Jones, who also lost the eldest of her five children — 15-year-old daughter Alenice — when she was struck by a truck 26 years ago and whose autistic son needs her 24-hour care, could be forgiven for putting all her energy into the challenges facing her family. But the 56-year-old is talking about her experience with cancer, most recently her own, to encourage others to be proactive about their health — especially women and breast health. Next month she’ll host a Pink Ribbon Breakfast. The annual breakfasts are Breast Cancer Foundation New Zealand’s biggest fundraising campaign. Money raised is used for breast cancer education, research and support for patients and their families, foundation chief executive Evangelia Henderson said. Every breakfast, small or large, helped the foundation be there for Kiwi families facing breast cancer or to prevent more women from dying from the disease — which takes the lives of about 650 New Zealand women each year, she said. It’s a tough time for Celeste Jones’ family — husband Dean Jones is receiving ongoing chemotherapy to extend his life — but she never considered not doing her bit. “You can’t spread the word if you don’t say anything.” She’s been doing self-checks and keeping up with her national screening mammograms since her 40s, following her mum’s advice as relatives on both sides of her family have been diagnosed with breast cancer, including her sister, niece, cousin and an aunt. Jones, who is Nga¯ti Kahungunu and Nga¯ Rauru K¯ıtahi, was feeling fit and healthy as she prepared for a hockey tournament in December when she realised something was wrong. “I thought I’d developed pecs but I quickly realised it wasn’t muscle. It was a breast lump.” She went straight to her GP and wasn’t surprised when the lump was later confirmed to be breast cancer, and chose to have a single mastectomy, instead of just having the lump removed and then radiation afterwards. “I decided the quickest and safest thing to do for my family was to have the mastectomy. I didn’t have the time to be sick when we also had my husband’s diagnosis to deal with. “I was fine with having my breast off because at the end of the day they’d served their purpose, they’d done what I’d needed them to do.” The surgery, on March 17, removed a 19mm tumour and because it was considered “early and small” her only ongoing treatment is taking a hormone pill for five years. She can now focus on supporting her 52-year-old husband, who found out he had bowel cancer just before going into surgery in February, during which surgeons discovered it had spread and was incurable. The couple’s two surviving daughters have moved home to help, along with their three grandchildren, all aged under 9. They bring joy, Jones’ Catholic faith brings comfort, and the reality of her situation, acceptance. “If I allow it to get to us, then everything’s going to fall apart. [And] we always say to the girls, you have to enjoy life.” That included doing what you could for others, such as helping other women realise how important self-checks and breast screening is, Jones said. She was proud of herself for finding the lump early and taking action. “I’m an example that if you’re proactive about your health then you can be completely fine after breast cancer. I want my daughters and all of my girlfriends to know that being open and talking about breast health is important, because it can save your life.” i To donate to Jones’ Pink Ribbon Breakfast fundraiser go to: https://bit.ly/3grXzoH 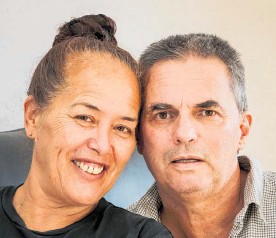