When Hinewehi Mohi sang the national anthem in te reo only at the opening game of the 1999 Rugby World Cup, it was considered controversial. It helped start an important conversation about our cultural identity, and the importance of te reo in helping keep the Ma¯ori culture alive. Waipukurau-born Mohi has many more strings to her talented bow, and has been made a Dame Companion of the New Zealand Order of Merit (DNZM) for her services to Ma¯ori, music and television in the Queen’s Birthday Honours List. She leads a field of six proud Hawke’s Bay people who have been honoured for their selfless dedication to others, and their life-changing work. Neville Jacobsen (QSM) has been honoured for his voluntary service to the Dannevirke community. He has been a volunteer firefighter since 1963 and was the town’s first firefighter to clock up 50 years of service in the brigade’s 119-year history. Up past Wairoa, Jim Brownlie, 74, has received the Order of New Zealand (ONZM) for services to agriculture and education. Brownlie is credited with setting up the Waipaoa Station Farm Cadet Training Trust in 2006 — the “greatest achievement I have had the privilege of being involved in”. In Hastings, ex- Federated Farmers Hawke’s Bay and national president Bruce Wills has been made an Officer of the Order of New Zealand in the Queen’s Birthday Honours. Wills has held multiple roles within the farming sector and is revered for his conservationminded approach. He is now developing a wetland on 58ha at Trinity Hill, west of Hastings, where he is also planting 3000 trees. Hastings’ former deputy mayor Cynthia Bowers has been made a Member of the New Zealand Order of Merit for her services to the community and local government. Bowers was gracious in acknowledging her MNZM, saying a lot of other people “have worked really hard as councillors”. “While I’m really proud to get the recognition, I’m just one person that has done what I’ve done.” Margaret Baker — the “heart” of Special Olympics — has been made a member of the New Zealand Order of Merit (MNZM) for her service to the Special Olympics in the Queen’s Birthday Honours. In doing so, she has paid tribute to her late brother Grant who began participating in athletics and swimming in 1984. Grant died in 1999, but Baker continues his legacy within the Special Olympics community. Congratulations to all our Queen’s Birthday honour recipients. 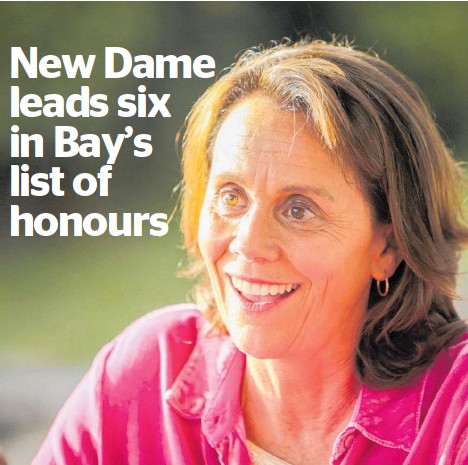