Wild Hawke’s Bay weather is set to make an appearance in NZ band Fat Freddy’s Drop’s new album — because that’s what it was recorded in. Rather than choosing an Auckland or Wellington studio, the Freddy juggernaut opted to record outside on farm and bush country near Waimarama that is special to them. Typically, it was “chaotic”. Torrential rain, gale force winds, and hot tea and scones were on hand as Wairunga took shape. The album, announced with a NZ tour on Monday, is a showcase of the band digging deep to debut five songs and revisit two classics captured in an outdoor performance sans audience. Wild weather elements play an important creative role. Scott Towers, sax player for the band, said the setting of Wairunga, was a place close to the band members’ hearts. Wairunga is a 280ha sheep and beef farm, just off Waimarama, owned by the Parker family for almost 100 years, and Towers told Hawke’s Bay Today it was a “perfect place to perform music”. “It’s a place etched in our hearts. I first went there when I joined the band back in 2006 and we had just done shows in Black Barn, and we went there to relax,” Towers said. “We were like ‘okay we have done beautiful architecture at the Michael Fowler centre’, and we were casting around for something similar in nature. “We collectively picked Wairunga because it’s quite a unique way to record music, and Johnny and Paulette are quite good friends.” The band members have partied, relaxed between tours and even made a song in honour of Wairunga. “It’s the one place in New Zealand that we have all got a strong collective history with,” he said. “There’s a sense of space and calmness up there, it’s an oasis. For us it was very unhurried and the music reflects that and unfolds gently.” But recording the album wasn’t quite as gentle. “The weather started getting worse as the day progressed, and as we finished it was a full-on storm,” Towers said. “It was chaotic, it added a bit of flavour to the proceedings but we were quite determined to do it in the end.” He said the band gave themselves “a couple of days” to record, but decided to do it all in one afternoon. “We had torrential rain, gale force winds and here was Johnny Parker in his typical cow-cocky way saying ‘ah it won’t rain’. We decided we were here, set up, and ready to play so we played.” He said Wairunga was “pretty reflective” of how the band was feeling on that day. “It’s a perfect place to be performing music when you can’t go overseas, which is what we would normally be doing at this time of the year.” He said every man and his best friend was there to watch them play. “We had partners, crew, even a couple of sheep. It was like a circus really and it was really good fun,” Towers said. “After the recording we had a warm cup of tea, scones and everyone headed back to the their respective homes.” Fat Freddy’s Drop embark on the national Wairunga album release tour in September taking in some of the country’s top venues, starting at the Christchurch Town Hall on the 10th. And while the band won’t be coming to Hawke’s Bay in September, Towers said plans might be afoot for the band to visit the region in summer. The new album will be available on August 20 on digital platforms with limited edition vinyl to follow. The session was recorded by the band’s long-time sound engineer Richard McMenamin of Western Audio. Beat maker and master producer Fitchie aka MU processed and crafted the live Wairunga audio recordings at BAYS studio while Calyx Studio in Berlin nailed the final mastering. 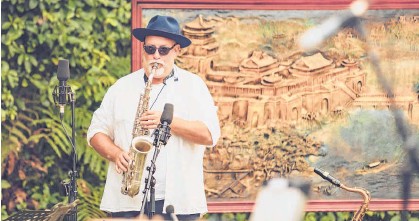