ONE OF MY LOTTO daydreams is to have my eyes lasered. A friend had this procedure and said it was quick, painless and expensive. Expensive wouldn’t be a problem if I’d won Lotto, but there’s another issue. I have a paranoia about anything getting close to my eyes. I once tried to test-drive contact lenses but as soon as the lens got within 5mm of my eye, I knew I would either faint or vomit. I blame this response on gooseberries. When I was about 7 years old, my mother had three gooseberry bushes and it was my job to pick the fruit. The plants were savage little buggers and I sustained numerous minor injuries as well as a strike to my eye when I stumbled and fell on to one of the bushes. Result — a loathing of gooseberries (I’ve never eaten one since), the aforementioned eye paranoia, and a deep-seated mistrust of plants with spikes. We’ve had a few spiky plants in our gardens over time — bougainvillea, butea palms, agave, silk floss tree — and most of them trick themselves out with gorgeous flowers and bright berries to pretend they’re completely harmless. Some of them are beautiful. All of them can draw blood and, honestly, I think they enjoy it. So I was delighted when The Landscaper completed our spiky plant annihilation programme yesterday by murdering two half-grown pygmy date palms which were just getting up to eye level. They were planted alongside some steps and every time I edged past them I could hear them daring me to get closer. During my investigation into how to kill them I came across a garden website detailing how to use murderous plants in residential gardens to deter burglars, marauding drunks, kids on motorcycles and other people’s livestock. “Only in America”, I thought. However, if security is on your mind but you don’t want to surround yourself with barbed-wire fencing, why not enlist plants to do the job? Take agave — it’s a fashionable plant prized for its architectural good looks and it does double duty as a deterrent to intruders. Its thick, dagger-like leaves can grow over 1m long, giving the plant a 2M spread. With a spike on the end of each leaf, agave creates a formidable barrier. No one is going to climb up a drainpipe covered in bougainvillea, so if you have a second-storey balcony that needs protecting, this is your baby. The bonus is that it comes in pinks, yellows, oranges, reds and white and offers up a truly showstopping display of flowers. The dense, thorny branches can grow up to 12 metres long and will provide an impenetrable barrier in exposed areas. Since I’ve become an occasional gin drinker (partly because I love the blue bottles my gin comes in), I’ve been thinking about sloe gin. Sloes are small, dark berries that grow on the blackthorn tree, (Prunus spinsoa) and with plenty of sugar to cut their tartness, they’ll transform a bottle of gin into a delicious liqueur in time for Christmas. However, the blackthorn does not want you to have a good time drinking sloe gin at Christmas and has made collecting the sloes an almost impossible task. The savage spikes on its almost black bark protect the berries from your foraging and if you persist, there will be blood. However, if you’re prepared to forego the sloes you can use the trees to create a formidable barrier around the perimeter of a property. If you want to risk proximity you can prune the trees into a neat, dense hedge, but if you prefer to err on the side of caution, leave it natural and let it get on with the job of deterring intruders. The thought of Christmas, with or without sloe gin, reminded me of Ilex aquifolium, also known as Christmas holly. We had one of these alongside our front steps when I was a child, and it was my job to water it daily in summer. It’s evergreen and fast-growing, and with regular pruning its prickly leaves will quickly provide a mean, spiny barrier. My brother Jim, four years old than I, invented a game of “dare” which involved each of us picking off one of the leaves and seeing how long we could squeeze it in our hands. It was years before I realised he had always picked one of the new, young leaves. No prizes for guessing who always won. 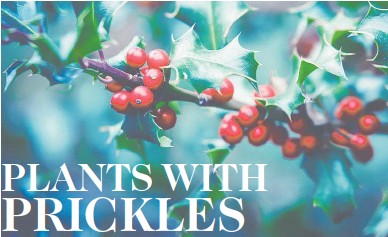