With just millimetres to spare, Kas and Nic Craw had their ‘new’ home delivered this month. It’s been quite literally, a big journey. The relocatable home was trucked from Auckland in two halves onto their Waihi Beach property and work has begun. It is a four-bedroom, 180sq m bungalow built in the 1930s. Kas says it was a daunting but exhilarating experience watching their new home coming down their driveway. “We saw it come — it was pretty impressive. There was millimetres in it getting through the driveway.” A new house was needed after their previous home went up in flames in September. The 100sq m house was two railway cabins lovingly built by the couple and decorated with their children’s artwork and keepsakes. No one was harmed in the fire, but the Craws were not insured. The family of four stayed in various houses and baches thanks to the kindness of others. Meanwhile, the community rallied, offering clothes and items, and held community fundraisers. About $44,000 was raised on a Givealittle page and a further $70,000 was raised through friends, family and community fundraising. The family have been living out of four caravan/cabins for some months. Their camping area includes a lounge/kitchen/office caravan, a sleeping tent, composting toilet and a shower cabin. “We have enjoyed our time but it was a temporary thing, and it has run its course especially now that it’s winter. We’re in each other’s space all the time.” Frankie-lee, 7, also has cystic fibrosis and Rio, 6, has asthma so time was of the essence. Building new was out of their financial reach so they investigated relocatable homes. They liked the sustainability and second-hand aspect of a relocatable rather than a new build. Kas’ first instinct was to write the house off as too much work. “So we sat in the car and talked about it and Nic had said we can replace all the windows, so I felt better about it.” The house had a good exterior, which appealed. In order to truck it, the roof had to be cut off. The initial costs were $150,000 and a further $200,000 will be required to bring the house up to scratch. The house is now put back together and is being gutted and prepared for joinery, with Nic mucking in. The expectation is they’ll be able live in it by November or December. Kas takes every experience as a positive. “This is all life experience for us. If you take it in the right mindset, every challenge is a chance for growth.” “This experience has enriched us, it’s been a challenge for the kids to be out of their comfort zone. We have such a really strong connection with the people who were in the house, and with the community as well, have been just wonderful.” The Nest is a yoga programme set up two years ago, in a large tent at the back of their Waihi Beach property. Kas also runs a nature school here, a school holiday programme, workshops and events. She teaches yoga at Waihi College once a week. Kas teaches her own yoga style, combining elements of yin, hatha and iyengar. Yoga ticked all the boxes for Kas — it spoke to her spiritually, physically and mentally. She bought the book What is Yoga at her very first lesson and underwent yoga training from there. The Nest is pegged as “a home, a playground, a learning space, which is sustainable, provides our basic needs and one which we can share with others, to help them find the happiness that simplicity can bring”. The Nest was inspired by an 18-month caravan journey across the country with their children. They realised living a simple life can create true happiness and they wanted to hold on to that lifestyle. 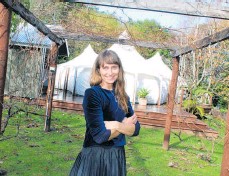