Biting southerly winds and downpours brought abysmal rugby conditions but made no difference to the loyalty of the 1500 supporters who travelled from Whitianga, Tairua and around the Coromandel to see who would take home the Mcclinchy Memorial Cup on Saturday. The vocals of Mercury Bay’s black-and-yellow supporters dominated — as did their mudstained team, taking home the cup with a 12-10 victory over Thames. “Mercury Bay’s defence was staunch, they shut down any Thames attack and forced a lot of mistakes,” commented Thames Valley Rugby Union rugby development officer Scotty Day. “When Mercury Bay held the ball they were patient, and were rewarded with a try at 20 minutes. A try on the 40th minute by impressive first-five Regan Crosland with the conversion gave a 12-3 lead and Mercury Bay continued to build pressure in the second half.” In the first five to 10 minutes of the second half, Thames scored and built the momentum with the scoreline at 12-10 to Mercury Bay. For a while, it seemed the game was almost at a stalemate. “It could have gone either way,” said Day. Mercury Bay made a substitution and “shut the game out”, helped by standouts Trinity Mcqueen at prop — the 19-year-old with his impressing greatly with his scrummaging — and Regan Crosland, along with Mercury Bay import Shayne Johnson of Tairua. At age 33, the former Tairua Senior Rugby team captain Johnson has played for 15 years and brought with him his own crowd of supporters when Tairua could not field a team this year. Tairua had only made an A Grade final once before and unfortunately they came away with a loss that time, which spurred the Tairua player to a 36 hour-long celebration after finally fulfilling his dream. He returned home on Monday with a Mercury Bay tattoo. “It actually gave me a bit of a fright when I woke up,” Johnson admits. “We’d talked about it earlier in the season and I said ‘yeah I’ll do it if we win’. I thought ‘why not’, I couldn’t win it for 15 years with Tairua so it’s special. But I had kind of forgotten we did it on Sunday night.” The father of three boys had “no regrets” and assured his partner Gabrielle Deane he is at no risk of getting another tattoo. “That was my 15th season playing senior rugby and I’ve got injuries. I’ve achieved my goal so it’s time to put some more work into the kids’ rugby.” For Thames, loose forward Frederick Kei was a standout with his dynamic play throughout, solid defence and strong ball-carries. However, Day said Thames unfortunately did not play to the potential they had shown all season: “A real shame especially considering it was their 150th year.” In the Thames Valley Senior B final for the Lawrence Memorial Cup, it was a tough day for Coromandel RFC but victory for Thames, with the final score of Thames 8, Coromandel 7. Coromandel were unbeaten all season until Thames took the action to them and held the ball for long periods, playing really good forward rugby, said Day. “Coromandel had their opportunity to take points and penalty shots but they started tapping and running from their posts, knocked the ball on, and played quite loose.” Sadly a serious neck injury to a Coromandel player in the second half stopped play for 10 minutes while the player was escorted off the field to heartfelt applause from both teams. He was taken to Thames Hospital. Thanks to Jason Bartley at Barts Rugby Photos for capturing some great moments throughout the season including the finals. Results: HG Leach 2021 Thames Valley Senior B Plate Final Mcdonald Cup — winners Cobras 27 Waihou 15; Thames Valley Senior B Final Lawrence Memorial Cup — winners. Thames Rugby & Sports 8 Coromandel RFC 7. 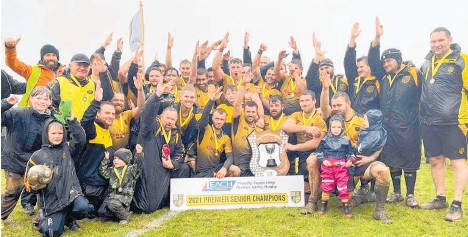