In it for long haul: Sustainable

This is a story about vision, hard work, triumph, loss and reinvention. It’s about a well-known Ka¯piti business and a resilient couple who have overcome many challenges to succeed. Waikanae Crab is a locally owned and operated family-run fishing business which was started in 1987 by couple Matt Whittaker and Narina McBeath. Matt had been a successful builder when he decided on a change of career and to go crab fishing. “We had a deposit for a house and I spent it on a boat.” They knew there were plenty of paddle crabs available along the Ka¯ piti coastline but getting customers to embrace a new taste experience would take time. Matt would fish in the morning and then in the afternoon take his catch into Wellington to sell. There were a few days when he would return with unsold crabs which would be released back into the sea. But they believed they could create a strong market and were encouraged with sales, especially in Porirua. And then they started processing whole crabs in a converted cowshed in Reikorangi. “We pioneered crab fishing in New Zealand,” said Matt, whose grandfather was the famous chocolatier James Whittaker who designed the peanut slab. Before long their faith in Waikanae Crab had proved itself. “At one stage we had four to five fulltime staff in the factory and 11 boats around New Zealand catching crabs for us. “We had crabs in every supermarket as well as top-end restaurants and lodges.” Luminaries such as Elton John, The Rolling Stones and the Queen ate their product. But the business took a huge blow when the Government decided to introduce a quota management system in 2004. “They gave us the quota history on the 1990 fishing years when you couldn’t sell crabs. “We took the Government to court.” It was stressful time for the couple as they watched their thriving business cut right back. And it was a bitter pill to swallow, especially as an individual catch entitlement system could have been introduced instead. “It would have helped everyone to grow their business and not be so penalised and chopped right back to those years,” Narina said. It was a brutal time for the business. “All our boats went and all the staff got fired,” Matt said. The couple went back to where they started — just the two of them, catching crabs, processing them in the factory, and selling the product to their main restaurants. The wind had been taken out of their sails and the business went backwards for a few years. “It was a terrible time,” reflected Matt. But slowly the dark clouds parted and the business went in a different direction. About five years ago the emphasis was about catching fish, rather than crabs, and a new processing facility as well as shop in 6 Manchester St, Paraparaumu, was built. It has gone from strength to strength and even seen some new staff come on board. Matt loves getting on his 20 foot boat Seahorse and catching fish in a sustainable way using a gill net targeting specific fish. “We sit out there and watch our nets. “If there is any by-catch returned to the sea alive.” He tries to catch enough fish to supply fish to customers for a week. “It’s local fish for local people.” The emphasis is about putting out “an excellent product”. “If it’s not 100 per cent perfect, doesn’t go out. “We did that with the crabs and it is it now we’re doing that with the fish.” And it’s proving very popular, with people queuing up to buy fresh fish as well as Narina’s popular homemade fish cakes, chowder and fish pies. “Narina cook.” Late last year they were working seven days a week, especially after a Country Calendar television programme focused on them. It was gruelling work, made more difficult when Matt suffered a wrist injury, but a testament to their hard graft. People ask them why the name Waikanae Crab has remained when crabs aren’t being caught and the business isn’t in Waikanae. “The thing is we had a name for an absolute premium product and very good service so we’ve kept it,” Narina said. — is an amazingly good 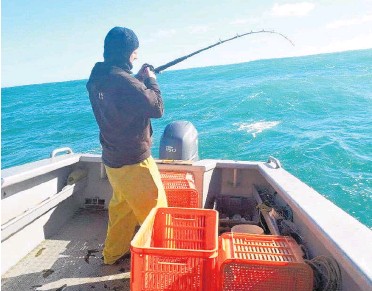 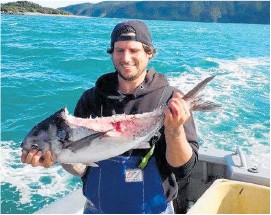