In the dark on Transmission Gully opening

There is no guarantee Transmission Gully will open by Christmas, with the transport agency unwilling to indicate whether the road will be ready this year. The $1.25 billion motorway out of Wellington was meant to open on September 27. But the road’s builder has advised that alert level 3 and 4 restrictions and supply chain constraints associated with Auckland’s lockdown have delayed the project. Ia Ara Aotearoa Transporting New Zealand chief executive Nick Leggett said there was significant public interest in when Transmission Gully would be open for business. “I think people have been patient, but want to know the general timeline — recognising there might not be a specific date available yet. “Waka Kotahi will know if it’s before Christmas or afterwards, so why not ’fess up? Put the information on the table that they have and just inform people so we’ve got some surety.” A Waka Kotahi spokesperson said the transport agency was “absolutely committed” to getting Transmission Gully open to the public as soon as possible. But a new opening date has not been agreed and Waka Kotahi is still in negotiations with the builder to understand the full impact of Covid19, the spokesperson said. “We will provide an update to the community and our partners as soon as the new opening date is agreed.” Leggett said if Waka Kotahi was not going to say whether the road would be open by Christmas, his assumption was that it’s not going to be open this year. The troubled 27km motorway is being built through a public-private partnership (PPP), the Wellington Gateway Partnership (WGP), with CPB Contractors and HEB Construction subcontracted to carry out the design and construction. Wellington Mayor Andy Foster told Newstalk ZB’s Nick Mills the public needed to know what was left to do on the project and how long that would take to complete, whether that was by “November or February”. He added: “What we really need is at least some clarity about the processes that they’re going through and the challenges that they face.” Asked whether Transmission Gully was going to open this year, Foster said he didn’t know. The Waka Kotahi spokesperson said that, as well as finishing works, there were other critical requirements the builder needed to meet before the motorway could legally open. “This includes safety and asset quality assurance work, and compliance with environmental consent conditions.” Ka¯piti Coast Chamber of Commerce co-chair Jacinda Thorn said businesses were excited about Transmission Gully coming online, but they wanted transparency about when it would actually open. “It’s just starting to wear on people’s patience. The lack of clarity is almost more frustrating than the delays themselves. Largely we’re in the dark.” Thorn said the road would make it easier to get in and out of Ka¯piti, draw more people into the region, and improve the local economy. “We need to have a very definitive finishing line so people can plan for when to grow their business or maybe launch something new they’re thinking about doing, and also give the people living on the coast a bit of a break when it comes to commuting.” 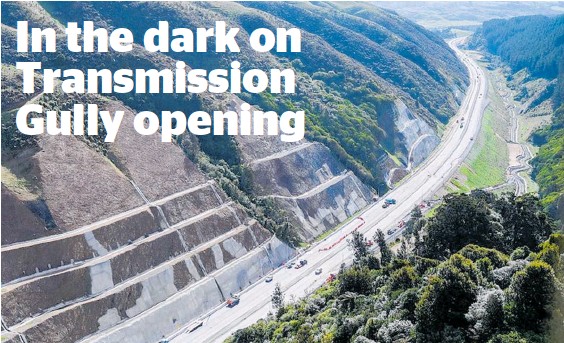