Stepping up to health challenge

As MC Victor Romero announced that the most steps in one day winner had completed 53,000 there was an audible intake of breath. But Romero hadn’t finished. Anita Chan completed not 53,000 but 53,457 steps in one day for the Humphries Construction Workplace Challenge. Hosted by Sport Manawatu¯, participants earned points in May by walking 10,000 steps a day and completing different challenges and walkways throughout the weeks. About 70 people attended the challenge prizegiving last week. On May 8, Chan ran the Rotorua Marathon in 3 hours, 39 minutes and 57 seconds. She was the 18th woman across the finish line. On May 23, she completed the Manawatu¯ Striders half marathon. Chan, a scientist at Medlab Central, completed plenty of steps each day throughout May, not least walking from her lab to the pathologists many times a day — a 600-step return trip. Jess Robinson was the steps individual winner, completing 759,868 during the challenge. She averaged more than 27,000 steps a day and on her “laziest day” did 19,254. One half of Team Robinson Real Estate, Robinson had completed her 10,000 steps by 8am most days, by going for a walk before the day got too busy. The mum of two says she is a football fanatic, training twice a week and playing once a week for the Palmerston North Marist Reserves in the central midfield. Robinson said participating in the challenge meant she became more aware of how much time she spends sitting down. She viewed being stationary as wasted time, as she would think she should be stepping. She competed against herself trying to do more steps progressively each day. “It’s been really fun, I think my fitness level has gone up.” The 278 participants in 79 teams completed 86,210,282 steps during May — that’s 60,371km. Zenith Fitness was the only team to do more than two million steps. Red Hot Chilli Steppers from Hokowhitu School were the team with the most points, with Parkland Green from Parkland School second. The top individuals with 460 points each were Kath Charlton from Parkland Green and Chris Franklin from the Cancer Society. Sharon Te Whatu entered the challenge to motivate herself to be active. “I knew winter was approaching and it would be easy to become less active without realising it.” The Manawatu¯ District Council business support officer said the hardest part of the challenge was staying motivated day after day. “If the weather was terrible during my break I didn’t venture outside to walk so I would get home to find I hadn’t achieved my 10,000 steps,” Te Whatu said. “Not wanting to walk the streets in the dark, I would either go to the gym to walk on the treadmill or walk around inside my house. I worked out that if I did 20 laps it equalled 1000 steps. A lap included the lounge, kitchen, dining room and hallway. My husband got used to me walking between him and the TV every couple of minutes! Some nights I had to do 40 laps.” Te Whatu said knowing she had to enter her number of steps into a spreadsheet each day kept her motivated. “I didn’t want to let my team down.” 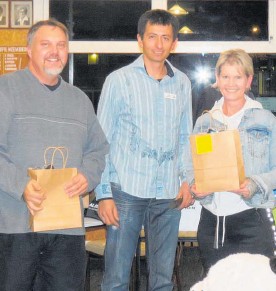 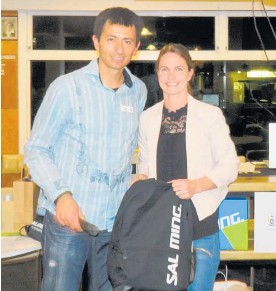