It’s 2186km from Palmerston North to Noumea, but only a flight of stairs from The Square to the New Caledonia Cultural Space. The space inside Alliance Franc¸aise’s library was created in 2015 by the government of New Caledonia. It has been revamped with new books, CDs and videos plus a TV to watch the videos on. The space was reopened at a drinks reception last week by Cecilia Madeleine, the official representative of New Caledonia to New Zealand. French is the official language of New Caledonia, and Madeleine is based at the French embassy in Wellington. Her role is to facilitate economic, cultural, language and educational co-operation programmes between New Caledonia and New Zealand. Born in France, she moved to New Caledonia — a French overseas territory — when she was a baby and grew up there. She wants to create a network of New Caledonian corners among Alliance Franc¸aise centres in the region and bring a little bit of French Pacific culture to French language students and those who come to cultural events. Karyl Koindredi has been teaching at Alliance Franc¸aise in Palmy since 2019. He is Kanak and spent four years studying to be a French teacher at the University of New Caledonia in Noumea. Ndrumbea is his first language and it is classified as vulnerable. Twentyeight Kanak languages are recognised. Koindredi learned English at school and university and wanted to improve his skills — the best place to do that is an English-speaking country, he says. Plus he wanted to see what was beyond the Pacific Ocean that surrounds Grande Terre, New Caledonia’s main island. The 27-year-old says Palmerston North is pretty and its size means it is not too crazy or stressful. People are kind and want to engage with him. Alliance Franc¸aise was founded in Paris in 1883. It is a worldwide network of non-profit, welfare, cultural and educational centres. Palmerston North administrator Isabelle Poff-Pencole says it is important to establish good connections with our French-speaking neighbours and there are many links between Ma¯ori and other Pacific populations. 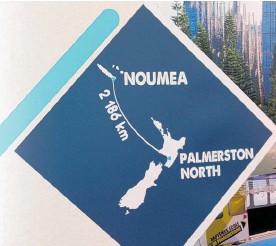