Floyd the Kleptomaniac Cat is famous for flogging stuff — and his penchant for pinching is now the stuff of legend. He has brought home undies and socks — all sorts of loot — even a size 13 workingman’s boot. Newspapers and toys, beanies and scuffs, and some personal items that were best kept hush-hush. Floyd now has a cult following on social media and his stories are about to feature in a new book titled Grandma’s Cat. His owner Kathy Gabriel moved to Levin from Lower Hutt three years ago, bringing black labrador Grace, an unwanted dog she had adopted from a shelter. A true animal lover at heart, it wasn’t long before she adopted unwanted kittens Floyd and his laidback brother Ted, who is more of a homebody. The full story is probably best left for the book, but the beginning tells of how two ginger cats came to live with a lonely grandma. Gabriel said a friend encouraged her to write a book so she did, with her two preschool grandchildren in mind. She sat down one night with a pen, and by morning had Floyd’s story down on paper. “I thought it was just going to be a story for my grandchildren to read.” She said if any good was to come from Floyd’s exploits, it was that she had gotten to know her neighbours a lot better. She couldn’t help but be embarrassed by his high jinks though, and was grateful that her neighbours were forgiving. “I am really lucky to have such cool neighbours,” she said. “And they think it’s hysterical, seeing their undies in a book.” One neighbour went to the trouble of sewing a toy for Floyd and attached a written message knowing full well it would make its way back to Gabriel. The stuff Floyd pinched was hung with pegs on the fence outside her home so neighbours knew where to go if anything went missing. “He has done it since he was young. Once he worked out there was a cat flap, things started appearing.” Ironically, Gabriel had since become the contact person for a Neighbourhood Support Group in the area. The networking support group works with Police, Community Patrol, Civil Defence, Fire and Emergency NZ and Age Concern, helping people feel supported, confident and connected in their local area. Floyd the Kleptomaniac Cat’s social media page now has hundreds of followers, some from as far afield as the UK and US. He has Facebook and Instagram profile accounts. Gabriel is looking for an artist to draw pictures for Grandma’s Cat, which she estimated would cost about $2500 to print. She has the text all ready to go, and is saving money to get it to print. She set up a Givealittle page to help with the cost of getting the book published and is in the process of engaging someone to proofread the draft. The company of her pets helped Gabriel get through a tongue cancer ordeal a few years ago, where the left side of her jawbone was surgically removed and replaced with bone from her fibia, a result of radiation treatment. She is now in remission. 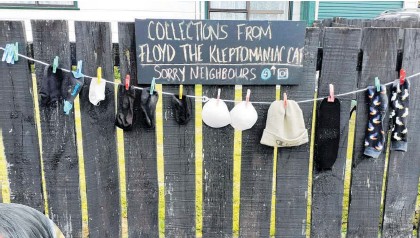