For services to theatre and the community 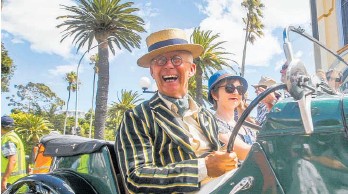 The award-winning playwright John Cocking will tell you that despite his colourful alter ego “Bertie” becoming a staple of the Napier Art Deco Festival over the years, he’s quite a private person himself. Cocking, a former Napier councillor, received a Queen’s Service Award as part of the 2022NewYear Honours for his services to theatre and the community. Cocking is awell-known servant of the Art Deco Festival and Hawke’s Bay theatre productions and is perhaps best known as Bertie, who comes out every year for the huge festival. Cocking also has a long history entertaining and educating children about Napier’s history and how it became the art deco city. “It was a bit of a surprise,” he said, of receiving a New Year Honour. “The first thing I thought of when it came through was someone was pulling my leg.” He said he first got involved with the Art Deco Festival in the early 1990s, a few years after it was established, and was a committee member of the Art Deco Trust Festival Events from 1994 to 2016. He began wearing a costume and turning himself into Bertie for the festival in the early 1990s, which has now become a staple of the event. “When I first did it, I thought I could be a sort of walking tourism officer who knows everything. People in the street could recognise me and ask me something.” He said that despite his colourful alter ego, and his work in theatre productions, he was quite a private person himself. “In away I ama very private person but when you put the kit on or costume, as it were, like a lot of things, you change personalities.” Cocking, a retired accountant, has written a play for the festival every year for the past 20 years. He has won awards for his work including for his 2014 play called Snap Time, which was based on his father’s mining experiences in England. He said one of the highlights of being involved in the Art Deco Festival over the years was establishing the free event in the Napier Sound Shell which was well loved.