Push for passenger trains in the Bay 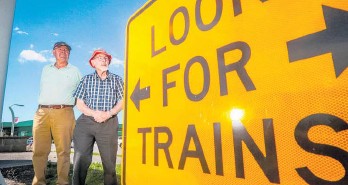 After 20 years without passenger trains in Hawke’s Bay, a train society says it is time to bring them back. They believe the move could help tackle climate change issues by taking more cars off the road and also reinvigorate small townships by introducing a comfortable commuter service into Napier and Hastings for workers and school children. The Bay Express was scrapped between Napier and Wellington in October 2001 bringing an end to over a century of rail passenger services between the two cities. Apart from sporadic services — such as a vintage railcar operating between Waipukurau and Napier during the Art Deco Festival — passenger trains have largely become a thing of the past in Hawke’s Bay. KiwiRail says it is open to reinstating a passenger service in the region in future but it is not financially viable on its own. KiwiRail chief corporate affairs officer Usman Pervaiz said an initiative such as bringing back the Napier to Wellington passenger service would require partnerships and subsidies. “With many transport choices available to people there is usually insufficient patronage on trains for stand-alone services to be financially viable. Even with higher patronage, such as for metro services, a subsidy is still needed for affordable access to the commuting public,” he said. “KiwiRail wants people to be on trains, that is in our DNA, and we’ll always be keen to look at whether we could operate any proposed new services and work with central and local government on any proposal.” There is currently a passenger train that runs from Palmerston North to Wellington, but no service between Napier and Palmerston North (on what is known as the Palmerston North to Gisborne line). He said a business case would have to be made ahead of a new service being introduced. “It’s a complex process so business case development, planning and funding and local or central government support are all required before you reach the point of a rail operator bidding or choosing to physically run the service.” Hawke’s Bay Rail Incorporated chairman Guy Wellwood said there were many benefits in bringing back public transport trains to the region. “I actually think we need to with climate change and the need to decarbonise,” he said. “We need to start thinking in terms of public transport and utilising our existing rail infrastructure and getting some more trains.” He said even a railcar which operated on a shorter stretch of the existing line through Hawke’s Bay would be fantastic. “I’ve been very keen on a commuter service that started north of Napier and ended perhaps in Waipukurau every day,” he said. “I think there would be demand for it and I think the Government should be encouraging rail because it uses so much less carbon [than a lot of vehicles on the road].” He said it could also make nearby towns more attractive to live in, where workers or school students could commute into Napier and Hastings on a comfortable train ride. “I think places like Putorino and Kotemaori north of Napier and places like Waipawa and Otane south of Hastings [would benefit].” He said the line from Masterton to Wellington was a success story and it could be a similar story here. He said the track between Napier and Gisborne would have to be one of the most spectacular rail lines in the world.