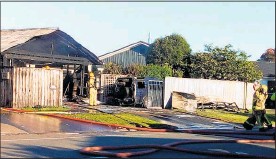 A blaze that badly damaged a Napier man’s home and destroyed a car and two motorbikes is being investigated but is not considered to be suspicious. The investigation was confirmed by Fire and Emergency NZ’s Hawke’s Bay district manager Ken Cooper, who said a sole occupant, aman over the age of 50, was asleep at the time the fire started in the garage of a threebedroom, single-storey home. Awoken by a smoke alarm, hewas able to escape safely as firefighters were being alerted at 6.12am. The fire happened at a property in Avondale Rd, between Blenheim St and Osier Rd in Greenmeadows, and Cooper said it was believed to have started in the garage. A FENZ shift manager reported it was “well alight” when the first crew from the Taradale Volunteer Fire Brigade arrived, and one video captured at the scene showed a fireball stretching as far as the property’s fence when the flames were at their peak. The quick hold the fire had taken was also evident by the pall of smoke visible across Napier in the still morning air, from at least as far away as Whirinaki, 20km to the north. Three other appliances and crews from Napier and Hastings were involved in fighting the blaze, which was contained by 7.30am. Cooper said damage to the house was initially assessed at about 80 per cent.