Food for the Soul

Peter Dragicevich explores places for a pit stop on a classic Kiwi roadie. In Amberley, he fills his belly, stocks up on beer, and ponders heroes of war and peace. 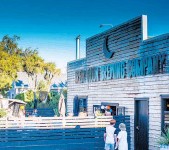 Sometimes when you’re bristling to get started on a holiday, you just want to get out the door as soon as possible, clear the big smoke and break your fast at the first semi-decent option a moderate drive away. Stopping within 30 minutes seems pointless but leaving it for an hour is to risk mutiny from hangry passengers or, indeed, your own grumbling stomach. For those heading north from Christchurch, that makes Amberley an appropriate candidate. Located on State Highway 1 between Christchurch and Kaikōura, this hub of the Hurunui District is also on the main route between Christchurch, Hanmer Springs and Westport. Coming from the north, it’s the start of Inland Scenic Route 72 that meanders through the Canterbury Plains to Geraldine via Rangiora and Oxford. You could argue that the ideal way to break up this stretch is to stop at one of the acclaimed Waipara Valley wineries, but not everyone has the time or money to splash out on a boozy lunch — let alone a driver who is prepared to remain sober while you indulge in tastings. Amberley got its start in 1864 when Frederica Josephine Carter subdivided land north of the Kowai River and named the new settlement after her childhood farm in Oxfordshire. For those who are used to blasting along SH1 without pause, any impression of the town that lingers is likely to be of a nondescript commercial strip with four petrol stations and a giant Countdown spread along the busy highway. But historic Amberley grew around its railway station, a few blocks west of the highway, and there’s more charm to be found in the leafy streets just off the main drag. So where’s good for breakfast? Decent cafe options on SH1 include Nor’Wester and the Paris Bakery, but those in the know turn off the highway at the Art Deco Amberley Hotel and head along Markham St to Little Vintage Espresso. Housed in a whitewashed cottage, it’s a reliable spot for coffee, all-day breakfasts and home baking. The Brew Moon Brewing Company is a near neighbour, although it doesn’t open its doors until the afternoon. If you’re not the designated driver, take the opportunity to sample from the 16 craft brews on tap while munching on a thincrust wood-fired pizza in the beer garden. Stomach sated, there is a smattering of interesting sights scattered around the compact town centre. Head back to SH1, where a bronze Charles Upham has been keeping watch over the Hurunui District Council buildings since 1997. After being awarded two Victoria Crosses for gallantry during World War II, Upham bought a farm up the coast at Hundalee in the northern reaches of the district and lived there until shortly before his death in 1994. A very different local hero is remembered in Chamberlain Park, albeit in a much more modest manner. Here a plaque marks a tree planted in memory of writer, peace activist and New Zealand’s most celebrated communist Rewi Alley. The Alley family moved to Amberley in 1898 when Rewi’s father was appointed principal of the local primary school, which young Rewi attended (the school now has a hall named in his honour). He came to prominence as an educator in postrevolutionary China, which perhaps explains the park’s Chinese-style bridge. The main attraction of Chamberlain Park, however, is the Cob Cottage, a tiny house made of clay, mud, straw and sand, where you can peer through the windows at a tableau of settler artefacts. If you’re interested in heritage architecture, Amberley’s most significant building is a little further south on SH1. The Catholic Church of the Most Holy Passion was built in 1866 under the patronage of early New Zealand premier Sir Frederick Weld. He was a scion of two venerable recusant Catholic families, which is why this striking wooden Gothic church with its distinctive external timber framing and unusual square tower came to be erected in that poster child of Anglicanism, colonial Canterbury. The whole thing was prefabricated in England and sent to Aotearoa, Ikea-style, as a flat pack. If the door is unlocked it’s worth taking a peek. The Anglicans have their own heritage listed Gothic-style church, Holy Innocents, on the street behind Chamberlain Park. It’s at its most chocolate box-worthy in spring when the surrounding trees are heavy with blossoms. With a full belly, it couldn’t hurt to say a quick prayer that the Lewis Pass remains open before continuing on your way. ■ For more things to see and do in the region, go to visithurunui.co.nz.