I am forever researching the wildlife that I paint, but this week I decided that it was time I did more to find out about how it is looked after locally. I contacted the Mokoia Island Trust, who warmly welcomed me, and found myself on a voluntary mission to the island a few days later. It is a place rich in history, from the story of Hinemoa and Tutanekai and the times when local hapu lived and farmed kumara in the volcanic soils, to continuing pursuits bringing learners and tourists over. However, the wildlife refuge status which Mokoia gained in 1953 is what has returned and retained the native wildlife. When I arrived on the island, I watched as the others gathered paperwork, various bait, and implements to open and secure the traps, then set off with them to monitor and service the same. The only pests which we encountered were mice — a food of kokako but, in turn, predators of skinks. Rats and possums are greater hazards to native wildlife though. Autumn can see rats swimming across from the mainland but thankfully possums have not yet been found there. The checklists we carried were completed with details about each trap, used to build a picture for the trust of unwanted vermin and to guide conservation of the native, and often endangered, species. While there, I saw several varieties of native birdlife, such as pukeko, saddlebacks, black swans and robins, as well as flora such as rangiora, kohuhu and puahau. I was so grateful for the experience, and the kindness of the people who I met. They welcome anyone who wants to take part in these missions if they have room on the boat and, in turn, you really do get an awful lot out of it. For me, it was seeing and hearing the creatures which inspire my art in their natural environment, and doing a little bit towards their survival. Mokoia Island, I will be back. 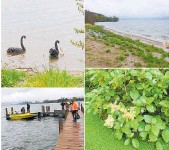