Teen shines with century and 5 wickets 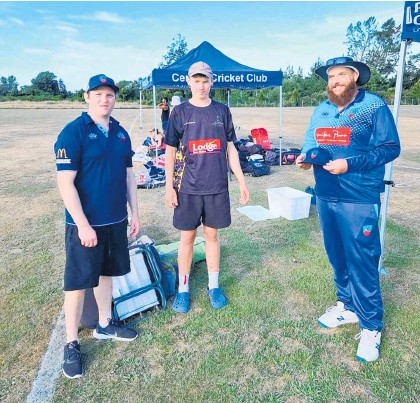 ARotorua teen has put the local cricketing community on notice completely dominating a recent senior men’s match. Tom Yetsenga pulled off a very rare achievement last Saturday, with the 15-year-old hitting his maiden century and taking a five-wicket bag in the same match. The achievement was made even more incredible by the fact that it was during a Lakelands Reserve Grade men’s game. Playing for the Central Cricket Club’s Academy team against South Waikato Cricket Association at Rotorua’s Boord Park on Saturday, Tom hit 103 off 69 balls including 12 fours and three sixes. He then backed it up with five wickets for 18 runs off six overs to lead his team to a 114-run victory. Back home for summer from Hamilton’s St Paul’s Collegiate School, Tom has made his presence felt in the three games he has played so far this season, scoring 187 runs from three innings and taking seven wickets. Central Academy player/coach Jeff Simmons, who scored a brilliant 141 in the same match, says the great thing from a coaching perspective is Tom’s desire to learn and improve quickly. “From training-to-training, gameto-game, he is soaking up information. Once he gets something new to work on he adds it to the raw talent that he already has, it’s been impressive.” “Our academy set-up has allowed us to create an environment for the players to learn from specialist coaches in preparation for our club games, their rep teams and ultimately set the standards for premier cricket and beyond,” Jeff says. “Tom is definitely an athlete that we are preparing for higher honours. Age is no barrier, if the youth players put performances together consistently we will reward them with higher honours.” Central Cricket Club president Allan Mcmurdo says he has never seen a kid demonstrate such natural talent and ability to compete. “His game sensibility exceeds his age of just 15 years old. He definitely showed us on Saturday that you can be humble and nice off the ground but in a game situation take the game head-on. “Taking 28 runs off one over was a clear sign Tom plays for keeps, he definitely was ruthless in his determination to help the team get a great score.” Allan says Central Cricket Club will support Tom in any way they can. “We are creating an environment where young athletes can learn, achieve and improve their cricket as well as develop relationships. Be the ‘Best You Can Be’ is a great way to describe how we are going about our business.” Allan says Tom will be making his premier debut in the coming weeks and is a talent to watch out for. “It would be great to produce some home-grown talent into first-class cricketers. “We believe with the right structures we can do that, we have some of the best coaching and senior player resources in our region and with young talent like Tom coming through our system, the dreams will turn into reality.”