When it comes to university, being there makes all the difference, says University of Otago student Tane Whitehead. The former Spotswood College deputy head boy is now in his second year at Otago and says studying there has opened up a whole new world of opportunity to him. “It wasn’t something I saw as possible in my future, it wasn’t even on my radar.” That changed, he says, when he received a Poutama scholarship from Otago University, enabling him to visit the university and see for himself what opportunities were there for him through the Hands-on at Otago programme. The goal of the programme is to support and show interested students what researchers at the university do, why they do these things and to encourage talented young Kiwis to consider further study as a step in their career pathway. “The scholarship covered all the expenses on the trip. It really was a once-in-a-lifetime opportunity for me. It was the longest I had ever been away from home, my first time on a flight, and it gave me the opportunity to see what was available to me and showed me the world was bigger than New Plymouth.” Visiting Otago on the scholarship didn’t just help Tane decide to apply to study, but also gave him an idea for the future. “From that moment, I wanted to set up a scholarship to allow students from low decile secondary schools in Taranaki to attend the Hands-on at Otago programme. “Being from a low-decile school I know a lot of students do not take up opportunities presented to them, often simply because they believe they are not as good as students attending other schools around the maunga.” Cost is also a factor, he says, and the distance to Otago can seem insurmountable. “It is time for us as a community to help future tertiary students find their way.” Tane is doing this with the establishment of the Taranaki Hands-on at Otago scholarship, and has already secured enough funding to help one student attend in 2022. “The successful recipient will have the entire experience paid for, including flights and the application fee, as well as food and accommodation.” It’s not about getting more students to then apply to study at the university itself necessarily, says Tane, but opening their eyes to the potential in themselves. “Whether people are considering applying to the University of Otago or not, I strongly recommend they consider applying for this scholarship as a way to see what their future could hold.” Tane has already secured $2000 in pledges from Taranaki businesses and is appealing for more companies and individuals to get on board. “Eventually I would like to be able ˜to have it set up to generate an endowment so we aren’t raising funds each year, but rather have the money working itself and helping create more opportunities”. Tane wants to hear from any businesses in Taranaki that would like to help him support young people in the region meet their potential. “For me, attending the Hands-on at Otago programme was life changing. I made so many new friends from all over the country and really got to discover what university was all about. I want others to experience this too, and I want it to be accessible to all.” Contact Tane: whita204@student. otago.ac.nz to find out more. 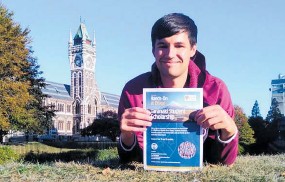