There’s no doubt that Tash Hill is passionate about being a firefighter. The 26-year-old from Stratford is currently an active member of not one but two volunteer brigades, Kohi Rural Fire Force and Stratford Volunteer Brigade, where she responds to a range of incidents such as motor vehicle accidents, medical emergencies, and rubbish fires. Tuesday May 4 was International Firefighters Day and Tash says it is important to celebrate the day. “It’s about recognising what the firefighters do in the community as well as recognising the employers who let their employees leave for a callout which could take several hours.” International Firefighters Day was first planned to honour five firefighters who died while fighting a wildfire in Victoria, Australia, in 1999. May 4 was chosen as it is the feast day of St Florian, who is the patron saint of all firefighters and was the first known commander of a Roman firefighting squad. Tash became a firefighter three years ago after finishing her studies at Waikato University. “I studied graphic design for three years and received a Bachelor of Computer Graphic Design. I have lived in Stratford my whole life and I became a firefighter to serve the community I lived in.” She says her three years of service have been the best three years of her life. “I wanted to be a firefighter for a long time, and when I moved back home from university, I decided that it was something I was going to do. Little did I know that it would become one of the best things in my life and I would be able to achieve so much.” When Tash isn’t fighting fires she works at Tutaki as the office administrator. “I really enjoy working here. Tutaki is a community organisation so they’re very supportive of my role as a firefighter.” During her time as firefighter, Tash has had the opportunity to be deployed to a number of large wildfire incidents with her first one being the Tasman fires which took place in 2019. “I arrived at the fire and was tasked with helping out to dampening down hot spots. They were long hot days, but it was awesome and very worthwhile. When I first got there, it was a bit daunting as I had no idea what to expect but everyone was so friendly and willing to lend a hand. “I had one firefighter from down south mentor me for a day after we had talked about this being my first deployment. I knew I had joined an awesome organisation at that point.” Tash’s most recent deployment was to Queensland in 2019. Tash describes this deployment as being quite different from her previous ones as she and her crew were heading into a situation with live fire. “We were dealing with unexplainable flame heights, people losing their homes and livelihoods. One day we saved a home and the feeling of reward that I felt was indescribable. That’s the thing about firefighting — not only do you get to be part of a warm and encouraging brigade who become like family to you but you also get to give back to the community.” CEO Rhys Jones says International Firefighters Day is an important day. “International Firefighters Day gives us the opportunity to highlight all the things our career and volunteer firefighters do to keep our communities safe. Our people are there to help respond to a variety of emergencies. “Whether it’s motor vehicle accidents, medical emergencies, dealing with hazardous substances, severe weather events and natural disasters, they are there ready to respond. “We appreciate being a firefighter means time spent away from loved ones, and we also want to take this opportunity to thank families and wha¯nau as well.” 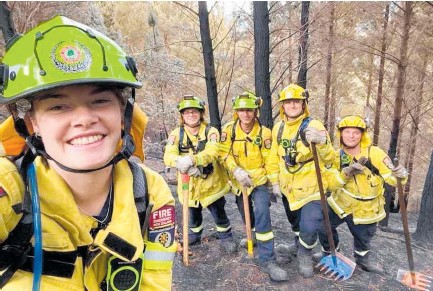