On Friday night, CMK Stratford Prem Women took on Ha¯ wera. Despite the majority of possession being Ha¯wera’s for the first quarter, Stratford managed to keep them scoreless until late in the piece, when a few Ha¯wera strikers were left unmarked in the circle. The second quarter saw Ha¯wera score again, this time from a PC. A goal was then conceded by Stratford in the third quarter after an intercept and quick turnaround following an attack by Stratford. The troops rallied to put up a solid defence for the final quarter with no further goals scored against them, although it wasn’t pretty. Stratford did put together some nice phases of play, stringing passes together and working as a team but were unable to make any attacks on goal count. Final score 0-3 to Ha¯wera. Te Kiri Rovers started quickly putting pressure on Avon’s defence in the Saturday match. A first-half onslaught that netted them three goals by halftime. Avon found ways to absorb the pressure and start to create chances. Rhyley Coles had a sharp game at right midfield and Josh Trowbridge upfront looked dangerous, but Te Kiri’s goalie pulled off three great saves. Ethan Larsen and Marcus Jackman were busy all day and Mitch Best threaded some remarkable balls forward. In the end Rovers were the well deserved 0-3 winners. The Broadway lads had another well-fought win, this time over New Plymouth Boys’ High School 2nd XI. It was a tight match with solid defensive efforts and many chances up front created from both teams. It was not until the dying minutes of the fourth quarter that the only goal of the match was scored. A brilliant passage of passing between Ekam Singh and Josh Bland led to a superb deflection finish from Josh Trowbridge, which shot past the keeper into the top of the net. The Brian Darth Funeral Service Stratford prem men’s team played New Plymouth Boys’ High School 1st XI for the club day. It was a tight tussle from the first whistle. Boys’ High pushed the defence with everything they had. They managed to get a lucky touch inside Stratford’s circle and scored in the second quarter. There were some outstanding passages of play, along with a huge work rate from Leslie “Moose” Longstaff. Final score 1-0 to Boys’ High. Lloyd Gernhoefer Contracting Stratford B Women played Northern women in Stratford on Saturday. The game was the final game on Stratford’s Club Day which meant the team had a lot of supporters. Stratford played an exceptional game, with Taylor Williams scoring two goals which drew the match 2-2 going into the final quarter. A mammoth effort in defence allowed Georgia Payne to get a runaway and have a 1v1 with the goalie to score the winning goal for Stratford in the last three minutes. Northern just couldn’t get it past goalie Demi Ward, who was player of the day for her exceptional saves. Final score Stratford 3 Northern 2. Saturday in Stratford: 2pm Stratford Avon v Stratford Broadway, 3:30pm Stratford Prem Men v NPOB Men, 5pm Stratford Prem Women v NPOB White Saturday in New Plymouth: 2:30pm Stratford B Women v Apex 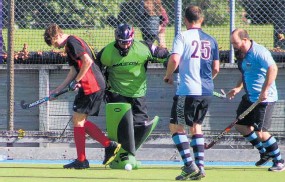