U15 hockey players hit the turf for festival

Hockey players laced up their shoes, grabbed their sticks and made their way to the turf for the 2021 Lower North Island Hockey U15 Boys Festival. Taranaki Hockey Federation executive officer Denise Hill says 10 teams took part in the four-day festival from October 3-6. “There were two equal-ability teams from Taranaki.” Denise says in the past, players took part in trials to be selected for a team for the national age-group tournaments. “Based on the Sport NZ philosophy Balance is Better, and what is best for our youth, we have changed to inclusive development programs that culminate in regional festivals.” She says Taranaki Hockey ran a nine-week development programme for players who wanted to be involved in the tournament. “There were no trials or selection. Those who wished to further attend a festival were welcome to do so. The festivals are based on development and fun. If associations enter more than one team, their teams are arranged so that they are of equal ability and the festival encourages players to play hard and fair, with winning the game as a goal, but there are no winners of the tournament. “Instead, recognition is given to the team deemed to be the fairest and most determined.” Even though there are no winners for the tournament, Denise says every team put in the effort to win the individual games. “All of the teams did really well.” Denise says the development programme is successful. “We have twice the number of children receiving development than the representative system. With more teams attending festivals, it has allowed us to send more umpires as well, which in turn provides them with fun and upskilling.” Denise says it is one of four festivals taking place in the lower North Island. “There are the under-15 Girls in Whanganui, under-13 Boys in Hawke’s Bay, and U13 Girls in Wairarapa.” Games were run at both New Plymouth and Stratford turfs to enable several shorter games for teams daily. “There were four teams in New Plymouth and six in Stratford each day. We also used two turfs to follow Covid-19 level 2 restrictions of the 100 limit. There were sanitiser and signin places set up, a spectator area and clear signage to direct players and spectators to where they had to go.” See this week’s photo page. 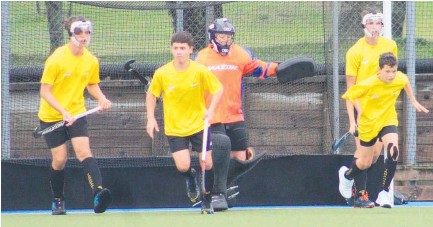