At least 80 nurses from Taupo¯ Hospital were due to take part in a nationwide strike yesterday. Local nurses say nationally the issues are around staff wellbeing due to heavy workloads and staff retention. There was no choice about going on strike, as most nurses at Taupo¯ Hospital belong to the New Zealand Nurses Organisation, and when more than 50 per cent of members agree to strike nationally then everyone is required to strike. “If the big city hospitals vote to strike, that takes the rest of them with us,” said Nurses Association union delegates for Taupo¯ Hospital Roz Martin and Marlene Snowden. However the two say they are in complete agreement with the reasons for strike action. “I trained in the big hospitals in Auckland. I wouldn’t want to work there now. “It must be horrendous. The workload, the stressors. They don’t have the wha¯nau concept we have here at Taupo¯ Hospital,” said Marlene, who has been a registered nurse at Taupo¯ Hospital for the past 41 years. Roz is an emergency department nurse and has worked at Taupo¯ Hospital for 31 years. She said New Zealand Nurses Organisation has a requirement to provide life-preserving services during strike actions and said the district health board often requests more staff during strike action than is normally provided. “It’s interesting that they [Lakes DHB] think it’s okay for us to cope [with that workload in the emergency department] normally. But when we strike, then suddenly we must achieve staffing levels to achieve lifepreserving services.” Both say the staff to patient ratio is sometimes too low at Taupo¯ Hospital, to the detriment of nurses’ wellbeing. They say when there is not enough staff, current staff are constantly asked to work extra shifts. “The result is nurses get tired, ratty, and burnt out. This increases the level of sick leave taken.” When a text comes in during their time off, asking them to come and work an extra shift, the nurses are inclined to go in. “In a small hospital we are loyal to each other. We are wha¯nau, we have each other’s backs. I look after my workmates,” said Marlene. Both say hiring nurses from overseas is a good short-term solution but doesn’t work in the long term, as the international nurses at Taupo¯ Hospital tend not to stay. “The pay is better. They stay in Taupo¯ for five years, get their citizenship, then go to Australia.” The coronavirus pandemic has put more pressure on nurses’ workloads for two reasons. There are more nurses taking sick leave as they cannot be at work with any cold-like symptoms. Secondly, Roz says the emergency department is seeing more people who would normally go to see their GP. “The family doctors are asking patients to have phone consults and many people want a face-to-face. After 5pm, when the GPs close, the numbers go up in ED,” says Roz. The shortage of midwives in Taupo¯ also impacts nurses at the hospital. “There are fewer registered nurses available for casual work to fill in when one of our nurses is sick. The casual nurses are more likely to be covering shifts in the birthing unit.” Marlene and Roz say pay rates are important as nurses are an ageing workforce and younger people need to be attracted into the profession. They explain the lump sum being offered to nurses is actually a hangover from an unresolved pay equity process that was meant to be resolved in December 2019. “Because nursing is mainly a job done by women, there was an acknowledgement of gender bias with nurses being paid less than maledominated occupations. The lumpsum offer of $4000 is back pay, but the pay equity process is still ongoing. “It’s so complicated. To the public, it looks as though the nurses are getting extra.” Traditionally, once the nurses have completed their negotiations, then teachers and other government employees address their own pay issues. “Nurses always negotiate first. The female-dominated, caring profession always has the hard road.” Having given more than seven decades of nursing service between them, both Marlene and Roz say this will be the last time they act as union delegates for the New Zealand Nurses Association. “2018 was the first time nurses went on strike in 30 years. And the issues from that time have still not been resolved.” A Lakes DHB spokeswoman said contingency planning for the nurses’ strike had been underway for weeks and everything was being done to ensure patient safety. 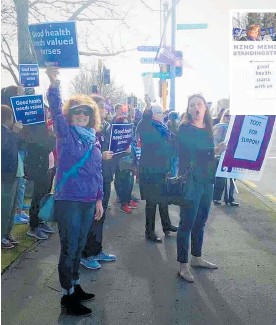