Taupo¯ girls end the season on a high

The schoolgirl rugby season finished on a high with Taupo¯ -nui-a-Tia College winning 15-12 in the Bay of Plenty Secondary Schools Competition in the final against Tauranga Girls’ College. It is 11 years since a Taupo¯ team has won the tournament, and manager Rowan Arnold said the victory was all the sweeter as they played the TGC team on their home ground. “It was tough for our girls with the travel, and the opposition having home support,” she said. “But our girls showed great grit and skills to come away with the win.” Rowan said Taupo¯ was leading at halftime 10-0 but Tauranga came back in the second half to score twice, with the last points being scored just on fulltime. Captain Ella Wisnewski said it was “a great opening running game with lots of skill on show”. The win against Tauranga Girls’ College was particularly poignant for Year 13 student Ella, who is leaving school at the end of this year. She is one of five core Year 13 players in the team. The others are vice-captain Mila Arnold, Hayley Church, deputy head girl Lilli-Lee Tupe and Hinekura Gardiner. Ella played in a mixed team of girls and boys from the ages of 8 to 11 years, but then took a break until starting high school. “I really wanted to play an all-girls sport and was super excited to find a girls’ rugby team at Nui,” said Ella. She said coach Dominick Arnold had built relationships with all the players and this made the team really enjoyable. “He’s our mate as well as our coach.” The girls’ team was really strong when Ella joined in 2017, but then many players left school and they had to rebuild with new players. “We had to start afresh and go back to learning the basics [ball skills]. We got some new players in, including year 12 student Uleah Foua.” Ella says the team always look forward to playing Rotorua Girls’ High School and they love to play on the college’s number one field. “Rotorua Girls’ is always a tough game.” Ella says her parents don’t have a sporting background but adds her dad, David Wisnewski, likes coming to watch her games. “And Mum has done lots of driving over the last five years.” Next year Ella is going to live in Tauranga to study health sport and human performance and hopes to play rugby in the Toi Ohomai Baywide Women’s league. “I would like to thank Dom and Rowan for their commitment to us.” Earlier in the year the girls took part in the King Country Rugby sevens competition. The senior girls won the tournament for the seventh year in a row, and the junior girls came third overall. Senior girls at Taupo¯-nui-a-Tia played for the Bay of Plenty sevens team and won the tournament for the second year in a row, qualifying for the national sevens competition, scheduled for December. The girls also won the King Country Rugby 10-a-side tournament. The senior girls played in the Bay of Plenty 10-a-side tournament and led the first round before changing to 15-a-side competition. The junior girls came second in the first round of 10-a-side as well before combining to make the 1st XV team. In 2020 the senior girls’ team won the Bay of Plenty competitions for 7-a-side and 10-a-side. Rowan said the Taupo¯-nui-a-Tia girls’ rugby teams have had great success over the 2021 and 2020 seasons which is a reflection of the players’ hard work and determination. “All the girls have shown great commitment, playing the game they love, through this tough season of stop and start play.” 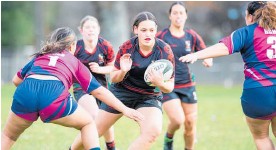