Waipa¯ District’s mayor is encouraging Waipa¯ residents to turn up and get vaccinated on Super Saturday — a day dedicated to a nationwide vaccination push to reach a 90 per cent vaccinated milestone among the general population. Mayor Jim Mylchreest is urging residents to make the most of Super Saturday this weekend and to use it as an opportunity to get their first or second dose of the vaccine. “Each of us has a part to play in protecting our community and getting vaccinated – so get down to your vaccination centre in Cambridge or Te Awamutu,” says Jim. Jim says Waipa¯ district needs to come together and get vaccinated and challenged the district to live up to its moniker. “It would be great if Waipa¯ Home of Champions had the highest vaccination rate across the country,” says Jim. Jim suggests to residents who are on the fence when it comes to the safety or efficacy of the vaccine, to have an educated discussion with healthcare professionals or with one of the nearly 2.4 million New Zealanders who are already fully vaccinated. Deputy Mayor Liz Stolwyk says it is important that Waipa¯ comes together as a district to get vaccinated before summer to ensure various events and celebrations went ahead as planned. “We need to reach that 90 per cent milestone by the end of the year so we can make the most out of the summer season, especially as the sporting and events season heats up,” says Liz. “We’re at a turning point with this pandemic and we need to make the most out of it so life can go on as normal.” Liz says seeing Waipa¯ district vaccinated was more important than ever after being heavily involved in the testing station at Kara¯ piro following the positive Covid-19 case in Cambridge last week. Kakepuku ward councillor Susan O’Regan has also voiced her support for Super Saturday. “My younger kids want to see their friends again and give their grandparents a huge hug. My older ones want to go to music gigs and 21st birthdays over summer,” says Susan. “Without widespread vaccination these simple things won’t happen. “Get it done and we can get back something closer to normal again.” 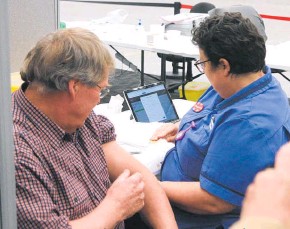