Celebrating cultures in Katikati with festival

It might be in Katikati, but everyone is welcome at this month’s edition of the Festival of Cultures in Katikati. Last held in 2019, the 2021 event will be on a smaller scale, but that doesn’t mean there will be any less cultural colour or vibrancy. The festival will be held June 26 at the Katikati War Memorial Hall and The Centre — Pa¯tuki Manawa from 10am and will feature cultural performances and food and craft stalls from more than 20 ethnicities. The revised date comes after the Festival of Cultures committee was forced to cancel the event in March due to Covid-19 alert level 2 restrictions. Western Bay mayor Garry Webber says while next month’s festival will be on a smaller scale, with no street parade, it was important to host a festival and build on the success of the inaugural festival in 2019. “At council we’re committed to promoting a feeling of community and inclusion and celebrate all the unique cultures there are across the district,” he says. “And while the festival is in Katikati, it is a district wide celebration with people and groups welcome from all parts of the Western Bay.” Garry says the inaugural festival in 2019 was a vibrant spectacle. “I encourage everyone of all ethnicities to attend and help make this a big celebration.” Anyone from a cultural group that would like to perform on stage or food stall holders who specialises in authentic traditional foods who would like to be part of the festival should send an email to events@westernbay.govt.nz. The festival is supported by Western Bay of Plenty District Council, under the umbrella of Welcoming Communities, with many organisations involved, including Katch Katikati, Katikati Community Centre, Te Rereatukahia Marae, Katikati Indian Association, Katikati Taiao and community volunteers. It is funded by Western Bay of Plenty District Council, the Ethnic Communities Development Fund, Baytrust, TECT Community Development, Katikati Lions and Hume Pack N Cool. 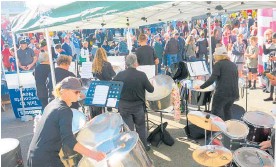