RRUGBY angiuru hung on with some swarming defence to take the spoils in Saturday’s Baywide rugby derby at Centennial Park. It was a bruising, see-sawing game either side could have won, but Rangiuru’s final-quarter tenacity gave them a 24-22 win over rivals Te Puke from the other side of Atuaroa Ave. On paper, with just one loss, the Pirates went in as favourites. Simon Rolleston kicked the hosts into a three-point lead in the first minute, but it took Te Puke just two more minutes to post the first try, Jack Hollinshead taking a quick tap and outsprinting the defence down the blind side to score wide out and then convert. A lineout win close to Te Puke’s line saw Nikora Broughton crash over to put Rangiuru back in front, Rolleston converting to extend the lead to three before Hollinshead tied the scores with a penalty. Rolleston replied and a high-scoring game looked on the cards with 23 points in the first 20 minutes. Te Puke skipper Luther Hirini set up left winger Ryan Wilkins on the half hour for another lead change before Rolleston gave Rangiuru the edge going into the break with another penalty. Rangiuru winger Tim Fatialofa is having a great season and scored within three minutes of the restart to take his side out to a 21-15 lead. Te Puke were getting on top in the scrums and their forward power led to a close-range push-over try with Masiu Akauola getting the ball down. Hollinshead was successful with the conversion and the lead had changed again, Te Puke one point to Results the good. It wasn’t to last though, with the Pirates penalised straight from the kick-off for Rolleston to complete the scoring. Terrier-like defence let Rangiuru hang on to their advantage and while Hollinshead had an opportunity to put his side back in front with a far from a straight-forward penalty, the ball fell short and to the right. Te Puke’s player of the day was Danny Underwood, with Rangiuru electing not to name a player of the day, crediting the whole team for a match-winning performance. The clubs’ development sides met in the curtain-raiser, Te Puke coming out winners 29-11. Next Saturday Te Puke will look to get back to winning ways at unbeaten Te Puna and Rangiuru travel to Greerton. 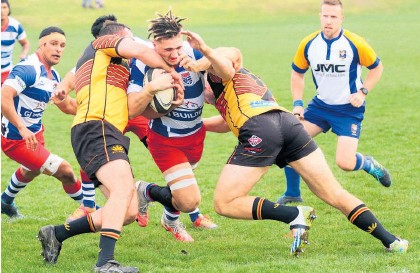