FOOTBALL After the previous week’s battle against nearest rivals Pa¯pa¯moa that ended in a 3-2 win, Te Puke were up for another battle at Litt Park against Taupo¯ last Saturday. The game was as much a battle against the weather with neither team able to gain ascendancy on the scoreboard, ending in a 1-1 draw. Both teams started strongly, trying to make the most of the rain and wind, but conditions made it difficult to play tidy football. The odd chance was falling each way, but it was Taupo¯ who struck first, Matthew Barry putting it to the left of ‘keeper Ben Day in the 27th minute. This did not stop the Te Puke attack and, six minutes later, Jindrich Hahn brought the home side level, smashing the ball to goalkeeper David Vera’s left. The second half saw the weather worsen making things even more slippery and difficult to play and create goal scoring chances. Both keepers made a couple of good saves, but any other chances were off target. Play of the day was Julian Wharewera for a strong defensive performance. Te Puke now sit in fourth position in the WAIBOP Championship and their final position in the league is still very much in their own hands as they have yet to play all three teams above them. In the next two weekends, they play top side Cambridge away this coming Saturday (2.45pm), then host O¯ tumoetai, who are currently sitting in second, on July 31 (12.30pm). On Sunday Te Puke’s women’s team was looking to bounce back from the previous weekend’s 2-1 loss to Kawerau, heading to Greerton to play Blue Rovers Vintage. A strong performance saw them return to Te Puke with a 2-0 win. The first half saw Te Puke take control with plenty of chances coming their way before Sammi Parish scored 15 minutes in. Ashley Weld spread the ball out wide for Chynna Davie, who terrorised Blue Rovers all game, to put the ball into the area. A deflection off the Blue Rovers ‘keeper saw the ball at Parish’s feet for her to put it in the net. More chances came before halftime, but all fell a little short. The second half brought more good play and more chances, but it was the 73rd minute when Te Puke got their second when Weld got the ball 25 yards out and drove it into the goal. Jamie Filmer marshalled the defence well, dropping off when needed and reading the game intelligently, Kelly Barker performed well in a new position at right back then moved into the midfield for a good 15 minutes keeping Blue Rovers at bay and making it easier to play with the ball Anann player of the day went to Boh Harris for her work out wide, tracking up and down the pitch and then up front. Next Sunday the women’s side heads to Gordon Spratt Reserve to play Pa¯pa¯moa. The game kicks off at 11.15am. Te Puke Classics are also at home, to Blue Rovers on Sunday afternoon. 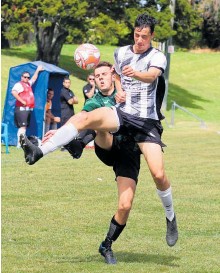