Trio weave their way to world-first

In what’s thought to be a worldfirst collaboration, three Te Wa¯nanga o Aotearoa staff have been awarded doctorates in raranga (traditional Ma¯ori weaving) after joined-up study through Auckland University of Technology’s Te Ipukarea Research Centre. It has been seen as a visible demonstration of the mana, academic expertise, and detailed knowledge of the three wa¯hine involved. Their joint project — covering raranga past, present, and future — carried on as they individually worked towards their Phds through research and creating raranga. The kairaranga (weavers) awarded doctorates are: Jacqueline Mcrae-tarei, a Kaiwhakahaere Ako in Kawerau, who studied historical raranga up to 1860. Gloria Taituha, a Te Awamutubased Poururuku, who looked at the period from 1860 to 1970. Rose Te Ratana, a kaiako from Rotorua, who researched raranga from 1970 and into the future. “We’re incredibly proud of what we’ve achieved together and will look to use what we’ve learned in helping to advance the understanding and practice of raranga around Aotearoa,” the three kairaranga say. “Raranga isn’t just decorative — it was essential to the successful migration of Ma¯ ori to Aotearoa and their life here amid a colder climate. So, we acknowledge our t¯ıpuna kairaranga from the distant past as well as more modern and contemporary practitioners who have carried the practice forward. “We’d also like to acknowledge the very supportive role of AUT in allowing us to take a collaborative approach to our PHD research.” To AUT’S knowledge, this is the first time internationally that there has been a joint PHD project in raranga, and there are only two previous raranga doctorates in Aotearoa. “The work the kairaranga have done demonstrates clearly how raranga is a very valid discipline of academic study,” says AUT’S Professor Tania Ka’ai, who supervised the Phds. “Their achievement also recognises not just the art form, but tohunga raranga [weaving experts] as well, and the creative practice of the kairaranga.” The overarching kaupapa of the joint Phds project was the role of kairaranga, who were essential in the effective functioning of Ma¯ ori society, from the past to the future. “Working this way created a bigger picture and looked across time,” says Jacqueline. Gloria says: “The idea of working collaboratively on the Phds reflects TWOA’S mahitahi [working as one] approach on projects, as well as the approach used by Professor Ka’ai in supervising us. “The idea was to have a joint project where each individual component could be individually assessed and stand on its own, while there would be an overarching narrative developed and synergies available through doing a collaborative project.” Rose says working together in a collaborative way has presented its challenges but has been valuable. The kairaranga say their research has created an important body of work about the practice of raranga. They feel this will help others understand and develop their raranga practice in a way that suits them. The trio, who will graduate in December, say raranga has a special wairua (spirit) and artistic qualities of its own and that raranga creates strong connections to t¯ıpuna (ancestors) who passed on the art to current generations. “That’s something many kairaranga talk about, that is how raranga creates links between past and present,” says Jacqueline. 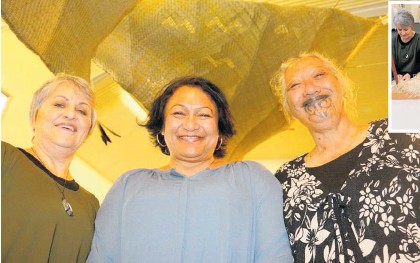