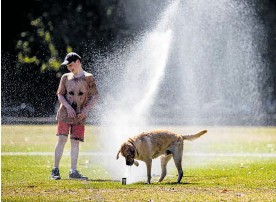 With summer at its peak and temperatures being consistently high, towns throughout the Waikato are facing water restrictions. Niwa revealed on Tuesday that 2021 was the hottest year for New Zealand in more than a century of records, and the forecast for the next three months also looks like temperatures are highly likely to be above average nationwide. In response to the heat and subsequent increase in water use, Hamilton and the Waikato district towns Tauwhare, Gordonton, Matangi, Tamahere, Newstead/eureka, Wallace Rd and Stonebridge Estate announced the move to Smartwater alert level 2 just before Christmas. Now two more councils have joined them. From this week, Matamata-piako district and the Waitomo towns of Te Kuiti, Piopio and Maniaiti/benneydale are allowing sprinkler use on only alternate days, between 6am and 8am and 6pm and 8pm. Alternate days means residents whose street address number is even can use their sprinkler systems between the above hours on days with even dates (ie, January 30, February 2, etc); and odd letterbox numbers can use their sprinkler systems on days with odd dates (ie, January 31, February 1, etc). Although hand-held hoses are allowed any time, it is encouraged to reduce non-essential water usage, and to use a timer on any sprinklers or irrigation systems. While Waipa district residents are not facing any restrictions and are encouraged to just use water sensibly, Mokau in the Waitomo district and Kawhia in the Otorohanga district are at alert level 3, meaning the towns have a sprinkler ban in place. Hand-held hosing is allowed anytime. Otorohanga District Council also urges Kawhia residents not to use council water supply to fill or top up pools, including portable and paddling pools. Water reservoir levels are critically low for Paeroa, Karangahake and Mackaytown, so Hauraki District Council has a total ban on sprinklers and handheld hoses in place for those towns. Not all councils use the four-stage Smartwater alert level scale. The Thames-coromandel district uses a five-stage alert level scale according to which Hahei, Matarangi and Pāuanui are at level 4. This means hand-held hoses only can be used outdoors, on alternate days. There is a total ban on the use of sprinklers, unattended hoses and garden irrigation systems. The council says unless people in Matarangi and Pāuanui help reduce water use immediately, they will have to put a total watering ban in place. All other water supply systems in the Thames-coromandel are at what is their alert level 2 — conserve water. Arapuni is at alert level 1 of the South Waikato district water alert level scale and is equal to Smartwater alert level 2. For more information and updates go to your local council website or Facebook page.