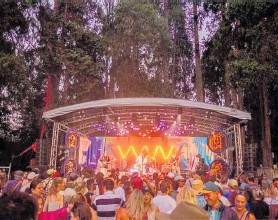 The festive season may be over, but the festival season is on full noise in Waikato with a big list of events set to take place for the remaining summer holidays. There are music events set to take place in Whangamata, Karapiro, South Waikato, Thames and at Mystery Creek. The next festival weekend up has two festivals at the two opposite ends of the region in store. Kickdown Festival in Whangamata, running from January 20 until 23 is the North Island’s first and only motorcycle festival, dedicated to all American, British and European machines. In the style of the legendary Beach Hop — but just for bikes — Kickdown will feature a motorcycle stampede, downtown bike show and concert at Joe’s Farm with the likes of Shihad, Devilskin, Hello Sailor and more. Additionally, there will be a $1 million prize draw and a joint “Ride the Loop” around the worldfamous Coromandel Peninsula coastal roads. At the same time, from January 20 until 23, the Soundsplash festival, usually held in Raglan, will be heading inland and take place at Mystery Creek due to Covid restriction uncertainties. Soundsplash 2022 will see a mixture of multi-genre international and local acts perform on four stages. The lineup includes Netsky, Sachi, Kora, Muroki and Lou’ana. January ends as busy as it started. Christian youth classic Festival One, running from January 28 until 31 is moving to a new location this year and is set to take place at Hartford, Karapiro, for the first time. The line-up will include Smokefree Rockquest winners Albert Street, Auckland alternative metal band Enoch, surf rock singer Bluey Green and NZ Music Awards winner Derek Lind. Close by, at Okoroire Hot Spring Hotel, outside of Tirau, That Weekend festival will be kicking off from January 29 to 30. Organised by Nextgen Touring co-founders Kurt Barker and James Bristow, That Weekend hosts a line-up of local acts including The Black Seeds, Pixie Lane, Leisure and Summer Thieves, and its first international act: Belgium artist Netsky. Different to most classic camping festivals, attendees will have access to all hotel facilities, including hot showers, restaurant, pub, tennis courts as well as the famous natural hot spring and a 9-hole golf course. At the end of February, Beach Hop organiser Noddy Watts is inviting to the Hootnanny Country Rock Festival in Thames. From February 25 until 27, he is bringing American Country flair to the Coromandel with a car show, truck parade, carnival rides, motorcycle and barrel racing, monster trucks and of course lots of country music. The line-up for Hootnanny includes Kiwi country veterans Eddie Low, Dennis Marsh, Brendan Dugan, Gray Bartlett as well as popular performers such as Jody Direen, Cam Scott, Jenny Mitchell and Dust and Gold.