Musicians tuning up for competition

Several young musicians from the Whanganui region are preparing to compete in the New Zealand Community Trust Chamber Music Contest. The Whanganui District Contest takes place on Thursday, June 10 at the Prince Edward Auditorium, Whanganui Collegiate School and is one of 15 district contests being held nationwide. It will be adjudicated by former NZSO principal horn player Gregory Hill, who is also an artistteacher at the NZ School of Music. He was a member of the New Zealand Chamber Orchestra, Melbourne and Tasmanian Symphony orchestras and a lecturer in horn at the Tasmanian Conservatorium. The 2021 Whanganui District Contest has attracted 24 ensembles involving about 80 musicians from seven different schools, including groups travelling from Marton and, this year, from St George’s School, as the competition has opened up to students from Years 7 and 8. The groups range from standard chamber music ensembles with violin or flute, cello and piano, to groups with singers, six hands on one piano, brass ensemble and a group including the concert harp. The New Zealand Community Trust Chamber Music Contest is the longest-running youth music competition in the country and in 2015 celebrated its 50th jubilee. It is the only nationwide chamber music competition for young musicians and composers. This contest is wellknown for nurturing young musicians who go on to successful musical careers in New Zealand and abroad. As well as organising the contest, Chamber Music New Zealand arranges coaching and open workshops for ensembles with the support of the Freemason Foundation and Trinity College of Music. Two weeks ago, Whanganui groups enjoyed some special coaching sessions with Liam Wooding, a pianist from Whanganui, as well as Simeon Broom, violinist with the NZSO. Following the Whanganui District round, the top ensembles from the contests in Hawke’s Bay, New Plymouth, Whanganui, Manawatu¯ and Wellington will travel to Wellington to compete in the Central Regional Finals on June 26. The top 12 ensembles from the three regional finals held in Christchurch, Wellington and Auckland will then go on to compete in the national finals in Christchurch. 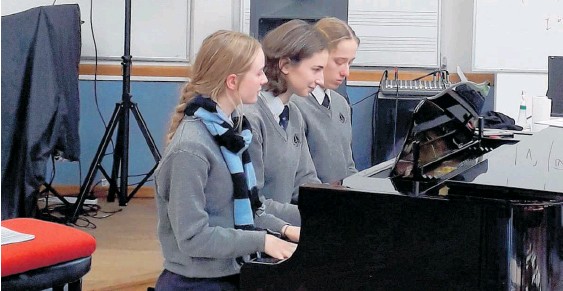