HAVING FRESH FLOWERS in the house has long been a desirable habit for many. As gardens have got smaller and many have less time, the use of flowers has changed from ‘high work’ perennials such as carnations, gladioli and dahlias to long-lasting flowering shrubs. Leucadendrons and proteas are two winter flowering plants that fit this criteria. They produce flowers that last for a long time, both on the bush as well as when picked and put inside in a vase. Both of these species flower from late autumn and through the winter months, a time when it can be harder to find cheerful colour in the garden. As plants in the garden they are both “no fuss” and easy care. Originating from South Africa, they have a natural affiliation for dry and well-drained soils as well as a hot, sunny position in the garden. They handle light frosts, wind and coastal conditions so make great subjects for gardens in and around Whanganui. For the most part, leucadendrons generally grow between 1m and 2.5m in height and width. The flowers look like they are an extension of the stem with a kind of cone sitting down below the leaf type bracts that is not seen unless the plant is viewed close up. As the cold of winter sets in, the flowers become more obvious with the leaves intensifying in colour to put on a real show. The colours vary from creamy yellows to orange-yellow to intense reds. One of the most well known and widely grown leucadendron varieties is Safari Sunset. It has boldly coloured red bracts and is a strong plant, excellent for cut flower production and as a garden specimen. It is not widely known but this outstanding leucadendron, which is now distributed worldwide, was bred here in Whanganui in the 1960s. A breeding programme in the nursery on Durie Hill was run by Jean and Wallace Stevens and their nephew Ian Bell. The Stevens’ garden was so wellknown at the time that the Queen Mother requested a visit be included in her 1966 New Zealand tour and is reported to have left “with an armful of slips and cuttings”. https://www.wikizero.com/En/Emily—Stevens—(hybridiser) Proteas are another plant ideal for producing a long-lasting flower display and an excellent cut flower. Proteas are sometimes referred as “sugar flowers”, because of the high nectar levels the flowers can produce. Thus they are highly attractive, bringing birdlife such as tui into the garden. The flowers of proteas are among some of the larger in regular home garden cultivated plants. The protea is a flower that is recognised around the world. The King Protea is the national flower of South Africa, the Proteas is also the name given to South Africa’s national cricket team and an emblem of the King Protea is displayed alongside the springbok on the jerseys, caps and blazers of their national rugby team. In terms of cultivation, they have a unique root system referred to as proteoid roots. These form a dense cluster 2cm-5cm thick at the soil surface, mainly remaining within the drip line of the plant. Research has shown these roots enhance nutrient uptake. These roots will not form well if there is high nutrient availability or too much moisture. The proteoid roots are enhanced by organic matter and soil bacteria. Avoid root disturbance and exercise restraint in the use of fertilisers. The use of organic matter will largely remove the need for fertilisers. It has been noted that proteace grown in fertile soils need more regular watering during dry periods. (https://www.actahort.org/books/185/185—17.htm) Both proteas and leucadendrons dislike phosphorus. This means you should not feed them like you would other plants – as the kind gesture can often be fatal. They are best fertilised with low phosphate fertiliser such as Osmocote for NZ natives. If they are to be grown in pots then a specialised low phosphate potting mix is necessary. These are both readily available at specialist garden centres. Some eye-catching varieties include: ■ King Protea (Protea cynaroides): Produces large dinner plate-sized blooms whose majestic pink velvety flowers resemble a crown. Flowering from autumn to spring, it grows up to 2m high by 2.5m wide. ■ Protea Margaret Watling: Produces attractive lime green flowers with black tips and a maroon centre during the winter months. Excellent for picking. Forms a rounded plant about 1.5m high by 1.5m wide. ■ Protea Susara: Beautifully bicoloured pinky red contrasting green flowers are produced throughout the year but peak in the winter months. Grows about 2m high by 1.5m wide. ■ Protea Mini Red: This small, rounded shrub produces reddish flowers sporadically all year round with a peak flowering during the months of late winter and spring. Growing only 1m high by 1m wide, it is excellent for smaller sunny, dry spots in the garden. 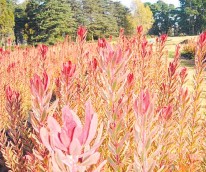 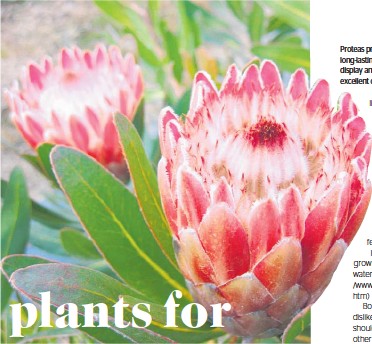