Exhibition a portal to another world

Exhibiting now at Fine Arts Whanganui Gallery is a series of paintings, acrylic on canvas, by Bryn McIntyre. He calls the series Portals. “Our modern lives are so filled with complicated stimuli that most of us seldom stop to daydream,” he says. The uninhibited wandering of the mind is important to Bryn. Each of these works are part of the same broad theme: They are “portals”, facilitating the wandering of the mind “from here to elsewhere”. Through prolonged gazing at these simple and pleasing combinations of colours, blends and rectangles, the portals are opened and the mind can wander more freely to the “elsewhere”, he says. “I spent my childhood in the North Island’s Central Plateau and Rangitikei area, where I spent a lot of time in nature and discovered a love for painting. Influenced by geometry and by the landscape around me, my first paintings mostly included hills and mountains in a cubism style. “When I moved to the Bay of Plenty, my love of the ocean began to influence many of my artworks during that time. “After moving overseas, I began experimenting with quite a broad range of painting styles in acrylic and oil paint. Since space had long been an interest of mine, I produced a number of space paintings. “In 2015, I had my first solo exhibition in Perth. “In the last few years, since moving back home, I have painted New Zealand landscapes, other-worldly landscapes, geometric patterns and the odd creature. “For my latest series, I have enjoyed producing minimalist paintings, retaining geometric themes in a more rudimentary way than past works.” Guy Wood, one of the collective of artists who share Fine Arts Whanganui Gallery, says it looks good in the gallery and he could see it hanging in the right place. He says it would grace a modern home. Guy was able to point out something that most lay people would feel but not be able to verbalise. He says that even though the designs, the paint, being two-dimensional, are on the same plane, there is still a depth to it. He says there’s a space in it, almost like a horizon. As an artist, he sees perspective and three dimensions, but it’s something you have to see the canvases to be able to “get”. Portals is showing at Fine Arts Whanganui Gallery until December 8. 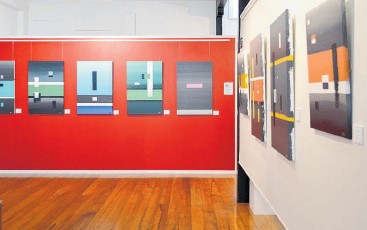 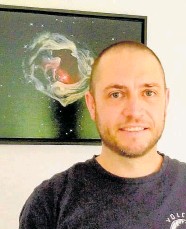 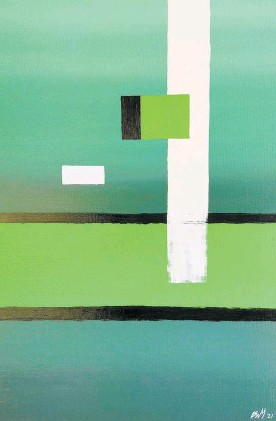 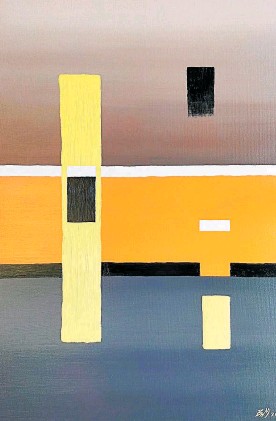