overturned their tables in the temple; and allied himself with the poor. He was nothing but trouble for the authorities. Jesus was a cool dude, an exemplary role model. The school’s spacious hallway was, on rainy days, also the venue for gym exercises. A travelling physical instructor, Mr Grubb, would put us through our paces on an array of gym equipment. I think he even had us jumping through hoops. The museum was another venue for extracurricular lessons. Mr Fahey guided us around the museum’s cellar with explanations of items that were not normally on display. He would also feature occasionally on the children’s 2XA radio programme, and the Central Baths in St Georges Gate was another outside venue. Swimming lessons were part of the school’s curriculum before the school established its own swinging pool. We had class periods in the Alexander Library. The school’s central location helped facilitate many of its activities and it was also, upon our liberation at 3pm, an excellent launchpad to interesting venues all around the central city area. For senior boys, in season, there was inter-school cricket on Wednesday afternoons at Peat Park (Mr Fleming) and rugby on Saturday morning at the racecourse (Mr Crotty). On the playground there was kinga sini (bull rush), footy (rugby), softball, marbles and play fighting (wrestling, in order to establish mana). Once a year there was school athletics at Cooks Gardens. I loved Queen Elizabeth’s use of the Latin phrase, annus horribilis, to describe the bad year she had in 1992. I think most people in their school years had one. Mine, in that school, was in standard one but, in the relative benign presence of my teachers, the three subsequent years restored some of my confidence. On my last day at that school students formed a large group on the school’s forecourt and we danced some American type square dance to the tune of Red River Valley. The sentimentality of the song and the occasion was not lost on me. I have fond memories of my time at Queens Park School. It played a significant role in the lives of me and my siblings and, I guess, the lives of many others. In 1954, Queens Park School celebrated its 75th jubilee. Two of my sisters were part of the organising committee and were just two of the seven children from our family that attended the school as students — just a fraction of the thousands who attended through the course of its history. The school and its playground have now been subsumed by the Davis Library and the extension of the Sarjeant Art Gallery. City Mothers and Fathers trumpet the great cultural and historic heritage of Whanganui but, I wonder, when they give emphasis to the Queens Park area, whether they give due consideration to the role of the Queens Park, St Augustines and St Monica’s schools in that part of the town’s cultural and civic life. In the 1950s only 2 to 3 per cent of the school leaving population attended university and the general expectation, if you were male, was to obtain an apprenticeship in a trade. That priority was still evident in the 60s although the percentage ratio differed significantly. Those who, in my class, took up apprenticeships either worked for a business or an organisation. They earned an apprentice wage, attended night school at no cost and acquired life-long skills. Those who followed the academic path through university would initially have been economically disadvantaged by comparison because of the cost. School leaving pathways for female classmates in most cases (some would have gone to university) obviously differed and the weight of conventional expectation would have determined other paths. And then there were some whose erratic lifestyles probably enabled them to take full advantage of the 60s. The 50s and 60s were not, as some say, a period of control and regulation that limited freedoms and created a dull, grey and homogenised society. History is a many varied thing, its best source is often from those who lived it. From my point of view educational opportunity availed itself to any willing participant without the loud incessant screech of “being the best that you can”. And for those entering the workforce: wages and conditions generally were prescribed by an award that was renegotiated each year that enabled even an apprentice to acquire a bank balance and partake in all that the 60s had to offer. It’s been a long time since then and now. I refuse to count the years since I first entered the gates of Queens Park School. As Mattie Ross said, “time slips away from us”. In the meantime, I try not to contemplate the future or live in a faded past but if ever there is a need for change, and a generation that needs to be told it, it is now. I hope that people of my privileged generation rid themselves of their bucket lists and don’t stand in the way of what needs to be done so that I can more comfortably contemplate the past. Say it for me Paul (Simon). Time it was And what a time it was, it was A time of innocence A time of confidences Long ago it must be I have a photograph Preserve your memories They’re all that’s left you 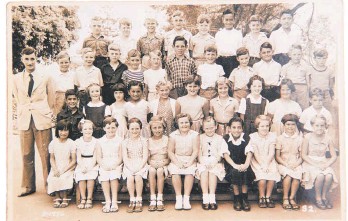