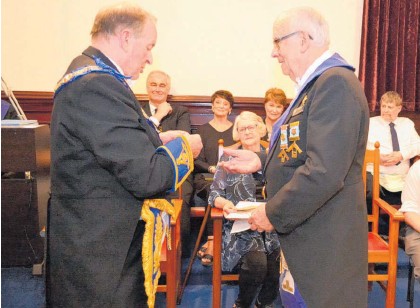 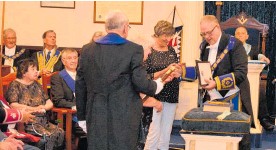 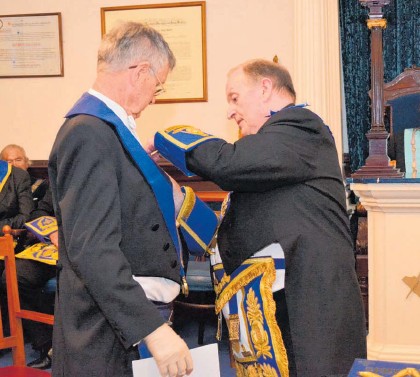 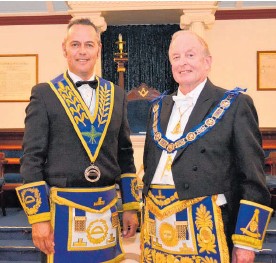 Two local Freemasons, Darol Pointon and Neil Elgar, having served in the craft for 50 and 60 years respectively, were recognised and honoured at a special meeting of the United Lodge of Wanganui No 468, held last month in the Dublin St Masonic Centre. In attendance was the Grand Master, MW Bro Graham Wrigley, a large number of Grand Lodge members, members of United Lodge of Wanganui, visiting brethren from other lodges, as well as family and friends of Darol and Neil. After a short meeting of the lodge and official welcome of all visiting brethren, the lodge proceedings were formally closed and the public admitted into the lodge rooms for the presentation of the 50-year badge and 60-year bar. All Freemasons remained garbed in their regalia throughout the presentation. Both Darol Pointon and Neil Elgar had their personal and Masonic histories recounted before being presented with their badge or bar. Darol joined Freemasonry in 1971 at the age of 30, his mother lodge being Lodge Wanganui No 219. That lodge has since combined with Lodge Rutland to become the United Lodge of Wanganui. The story was told of how his wife of 56 years, Lorraine, has supported his Masonic career and his long, distinguished time with Wanganui Harriers as a long-distance runner and walker. Darol has competed in and finished 55 marathons in many parts of the world. “Twenty-one in Rotorua, 13 in Whanganui and Hawkes Bay, three in Feilding, two in Australia . . . ” says Darol. Then there are the New York, Boston and London marathons. After jobs in Whanganui and elsewhere, Darol finished his working life as property manager for Whanganui High School for more than 20 years. He has been installed as Master of various lodges a total of 10 times and served as Grand Lecturer with the Grand Lodge of New Zealand. He has also served in a number of Masonic charitable trusts. Darol has also been involved with a programme called Live Life Lighter, encompassing five health organisations. Very Worshipful Bro Darol Pointon, Past Grand Lecturer, was presented with his 50-year badge by Grand Master, MW Bro Graham Wrigley, who called for a round of applause in acknowledgement of his half-century of service. Darol then spoke of the debt he owes to Freemasons past and present who guided him on his Masonic career, and he acknowledged those who had already attained their 50-year badge. The Grand Master then presented a 60-year service bar to Very Worshipful Brother Neil Elgar PGIG [Past Grand Inner Guard]. Neil was initiated into The Woburn Lodge No 25 on November 1, 1961 at the age of 23. At this presentation, Neil was addressed by his grandson, Bro Mathew Elgar who talked about his grandfather’s influence on his childhood and his own Masonic career. It was a touching tribute. Neil’s brother-in-law, Bro Alan Edwards, a “country member” of United Lodge of Wanganui, resident in Taranaki, spoke to Neil on the theme of “family and Freemasonry”, while Murray Cleveland spoke of his 60 years as a mason. Neil was a young schoolteacher when he joined Freemasonry and before he joined the Education Review Office in 1990, he was principal of Wanganui Intermediate School. Even after he retired, he was engaged in a number of jobs in the education sector. As a Freemason, he has been a member of The Woburn Lodge — his mother lodge, Research Lodge of Wellington, Lodge Ramanui, Lodge Rutland and Lodge Parirua. Neil was the last installed master of Lodge Rutland when, in 2004 it amalgamated with Lodge Whanganui to form the United Lodge of Wanganui No 468. He has served as secretary of that lodge for the past 17 years. Neil and his wife, Jocelyn, enjoy taking their caravan around New Zealand and spending time with their 10 grandchildren. The Grand Master, before presenting Neil with his 60-year bar, reflected on the family aspect of the craft, he being a third-generation Freemason, and how Neil’s masonic career overlapped with members of his own family in time and place. Neil then thanked a number of people, not least his wife Jocelyn and her strong and practical support of his Freemasonry. He spoke of how he became a Freemason 60 years ago at Lodge Woburn in Waipukurau. “Tonight, 60 years ago, I was doing my second degree.” And he thanked a fellow mason called Charlie, who would pick him up in his “clapped out Ford” and take him to lodge. He congratulated Darol on his 50 years and lay down a challenge to all current and future Freemasons. Worshipful Master of United Lodge of Whanganui, Martin Brown, thanked Neil for his years of faithful service as secretary. The Grand Master then used the occasion to mark another honour, by investing Bro Darren Shadbolt as the new Grand Superintendent of Works. “One of the privileges I have as Grand Master is to make appointments, promotions and put the right people in the right place to do the right job. One is an important role as executive officer looking after our interest in buildings and lodge buildings on a national basis and keeping the board informed.” The Grand Master mentioned a lecture given by Darren in Palmerston North on the importance of architecture in Freemasonry and the world. As Darren is an architect, the appointment, he says, is a good fit. He then invested Darren with the appropriate regalia for the position and in giving him the collar, jewel and apron for the job, he invested him as a Grand Lodge officer at the same time. District Grand Master Ash Williamson presented certificates of appreciation to Robyn Breton and Heather Rattray for all their work for the lodge. The evening concluded with refreshments in refectory. On his way to The United Lodge of Wanganui, the Grand Master MW Bro Wrigley, together with RW Bro Watt DepGM stopped off at Whanganui Hospital to pay a special visit to RW Bro Colin Johnson PProvGM. Colin, 94, took a tumble and fractured vertebrae in his neck.